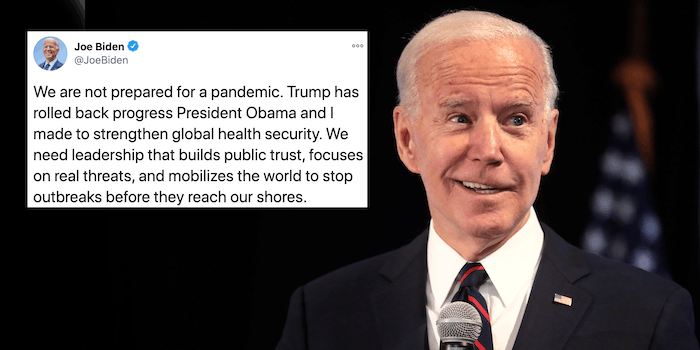 Before the current pandemic happened, Biden sent out a warning.

Twitter users are sharing a tweet made by Joe Biden exactly one year ago that warned America was not prepared for a pandemic under President Donald Trump.

The tweet, which has since been shared more than 65,000 times, was unwittingly a harbinger for things to come prior to the coronavirus pandemic.

“We are not prepared for a pandemic. Trump has rolled back progress President Obama and I made to strengthen global health security,” Biden tweeted on Oct. 25, 2019. “We need leadership that builds public trust, focuses on real threats, and mobilizes the world to stop outbreaks before they reach our shores.”

With the 2020 presidential election less than two weeks away, the tweet is gaining newfound attention as U.S. deaths from COVID-19 surpass 225,000.

Supporters of the Democratic presidential nominee are arguing that the tweet is evidence of not only Trump’s failure but of Biden’s superior leadership.

“A year ago today. Before COVID hit,” @RonaldKlain tweeted. “Your choice, America: Someone who saw it coming vs. someone who still doesn’t see it.”

Many users also pointed to comments made by White House Chief of Staff Mark Meadows on Sunday, in which he argued that the Trump administration would not be able to control the pandemic.

“The White House Chief of Staff admitted that they have no plan to contain the virus,” @creynoldsnc said. “I’d rather put someone in charge who noted this a year ago, has a plan, and won’t give up on the fight.”

“The hard truth is it didn’t have to be this bad,” Biden tweeted. “But Donald Trump’s shortsighted actions weakened our ability to respond to a pandemic long before COVID-19 reached our shores.”

The tweet also garnered attention from Trump supporters. But instead of admitting that Biden had correctly warned that the country was ill-prepared, conservatives argued that the tweet was proof that the pandemic was secretly orchestrated by the former vice president.

Jo Rae Perkins, a Republican candidate for the Senate in Oregon, accused Biden of knowing “something about the coronavirus” prior to its spreading in the U.S.

Ironically, long before absurdly blaming Biden for the pandemic, Trump supporters accused the former vice president of fear-mongering when he initially made the tweet.

For comparison, one year ago today Trump was using Twitter to complain to Apple CEO Tim Cook that the button on the iPhone “was FAR better than the Swipe!”