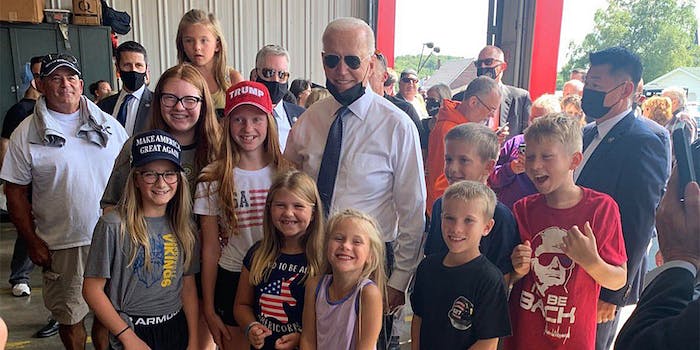 Was he being trolled? Or reaching across the aisle?

A photo of President Joe Biden, surrounded by children in Make America Great Again hats, the preferred gear of former President Donald Trump, is causing an uproar on the internet.

The image comes from Biden’s trip to Shanksville, Pennsylvania, during the 20th anniversary of Sept. 11. Flight 93, the last of the four hijacked planes, crashed there after passengers attempted to wrest control back from Al-Qaeda hijackers.

After touring the memorial, according to NBC, Biden visited a local fire department. The image appears to have been first posted on Facebook that day, by Jana Musser.

“We may not always see eye to eye, but we can all come together to be United!,” she wrote.

An account with the same name also tweeted it with a similar message, shouting out her daughter in the picture.

But that aspirational message by her has since been lost as the image exploded over the internet. A great number of Trump supporters considered it a well-executed troll job (which the caption doesn’t imply) and joked about how Biden maybe didn’t even notice the outfits, clear shots at his mental health. Biden has routinely been accused of suffering from mental decline by his conservative opponents.

Musser did not immediately respond to an inquiry from the Daily Dot over Facebook. But her framing of the photo makes it clear everyone online is taking it in a direction she probably didn’t intend.

While this image probably wasn’t criticism from a youth movement, Biden was booed earlier in the day at the 9/11 Memorial in New York City, as his handling of classified FBI material has been criticized by victims.