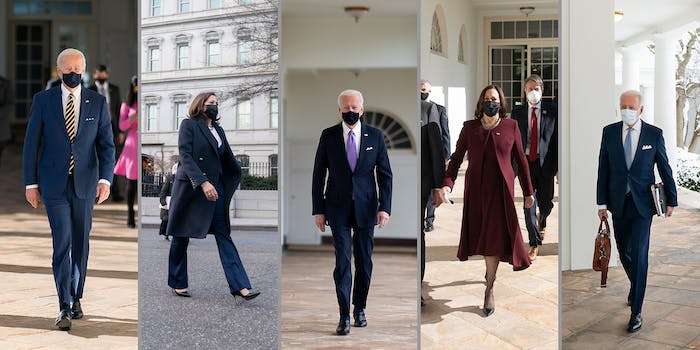 Biden and Harris have a demonstrated commitment to the shoe leather express.

Optics are important in politics. That’s why you rarely see a president standing in front of anything less than a dozen American flags, and even something so innocuous as a purple tie is considered zany and off-beat (according to Jeb Bush).

As they cultivate their official image, President Joe Biden and Vice President Kamala Harris seem to have settled on one thing and one thing alone: we walk places.

Nary a day passes when one or the other, or both, posts a glossy photo or video of them walking somewhere.

There are many, many examples, including more than one of Biden walking in slow motion, which someone should really make into a montage with The Proclaimers’ “I’m Gonna Be (500 Miles).”

The message is, apparently, we’re going places. And we’re doing it on foot.

As with all things to do with the presidency, people have noticed the duo’s penchant for hoofing it on camera.

“I’ve gone onto his media and literally every post is him literally walking,” tweeted @bug_meat.

A bit of a roasting has begun. Many people have likened the endless stream of walking videos to a fan cam.

While the duo will probably never best their predecessor’s ability to inspire great roasting, walking has become so ubiquitous to their administration that it’s becoming a meme.

As if to demonstrate that all that walking in stilettos isn’t wearing on her feet, or perhaps to give props to her pedicurist, on Saturday, Harris posted a photo of her feet.

Biden and Harris have plenty of critics. But no one can say they’re sitting down on the job.