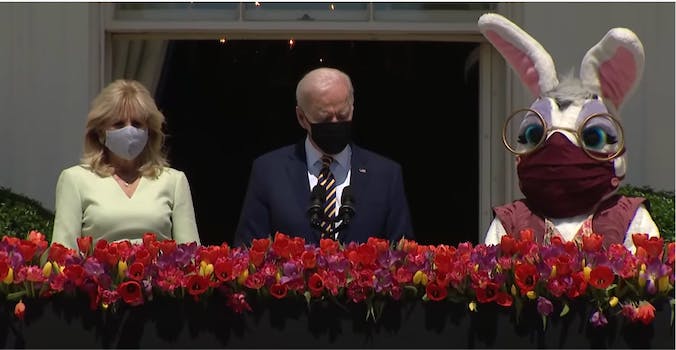 'Leave it to Joe Biden to ruin the Easter Bunny.'

Conservatives are not happy about President Joe Biden and First Lady Jill Biden’s appearing with a masked up Easter Bunny on Monday afternoon.

Biden addressed the country on Monday in lieu of the White House’s traditional Easter Egg Roll. As part of the address, Air Force Lt. Col. Brandon Westling stood next to the president and first lady dressed in a Easter Bunny suit with a mask over the nose and mouth.

“We look forward to next year when the White House will ring with joy the season once again and there will be an Easter Egg Roll, God willing,” Biden said.

The masked Easter Bunny is likely trying to cement Biden’s response to the coronavirus pandemic and bring attention to the CDC’s recommendation of wearing masks even after vaccination.

The White House has had a person dressed in an Easter Bunny costume for years, and like clockwork, the bunny seems to ignite some kind of reaction from people online. In 2017, during former President Donald Trump’s first Easter Egg Roll, the bunny became the center of a meme.

That tradition continued on Monday, as Biden’s message of having “joy” ring at the White House next year was not heard by the his critics on the right.

Instead, many conservatives were focused on the face mask put over the Easter Bunny’s face.

“Such sick people,” another added.

Another Twitter user chimed in: “Leave it to Joe Biden to ruin the Easter Bunny.”

But they were far from the only ones.

Wait until they find out there were two masked up bunnies at the White House on Monday.