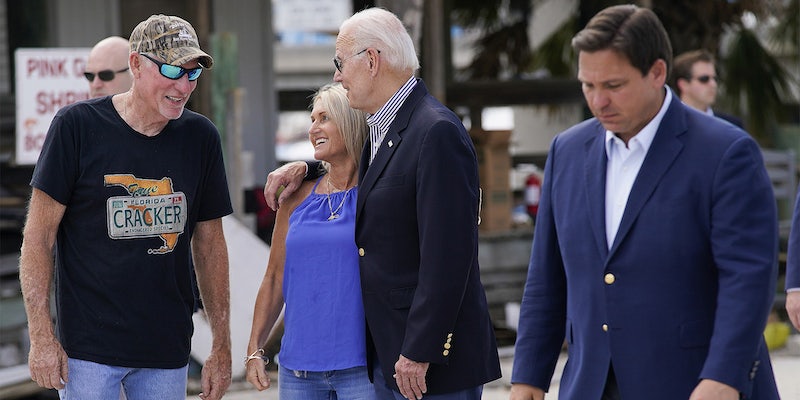 Biden and DeSantis photographed in real-world Virgin vs. Chad meme

Much has been made of President Joe Biden’s visit to Florida as the state struggles to recover from the devastating effects of Hurricane Ian.

The president would be meeting Florida Gov. Ron DeSantis (R), who has been perhaps his most vocal critic as he mounts what is likely a presidential bid against Biden in 2024.

But together, the two pledged to put partisanship aside, and do everything possible to aid Floridians in need of electricity, housing, food, and clean water, in the aftermath of one of the most destructive national disasters the state has ever seen.

DeSantis similarly was happy with the way Biden’s administration responded.

But the war of words was no match for the meme wars online. A photo yesterday of the two showed a confident Biden with his arm around a lady, rocking shades, and a slumped DeSantis, immediately giving the internet Virgin vs. Chad vibes.

The Virgin vs. Chad meme is a popular online comparison showing a desultory, downtrodden loner compared to a well-off, contented, and buff man, often listing a number of attributes that showcase the difference between the two.

Does that image match up? Well, the internet sure feels that way.

Biden also had several other breakout viral moments during the visit, including telling someone that “No one fucks with a Biden,” and claiming DeSantis’ agrees with him on the effects of global warming.