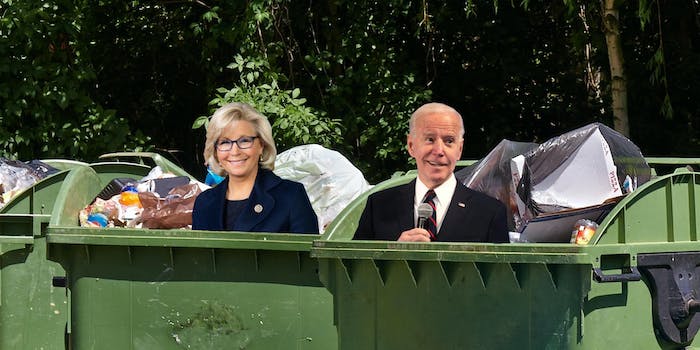 Less than a year into President Joe Biden’s term, people are already talking about the 2024 election. Naturally, there’s a lot of disagreement about the proper strategy and candidates.

The Biden-Cheney 2024 presidential ticket is getting lambasted online.

Friedman suggested the unconventional ticket in his Tuesday column in the Times. In the piece, he wrote that the Israeli government has fixed the gridlock that’d stymied it for two years by forging a coalition across the political spectrum. Or, as he put it, “the lambs there actually lay down with the lions.” He suggested the United States do the same.

The thrust of Friedman’s piece argues that it’s necessary to reestablish democratic norms to rebuke former President Donald Trump’s lies that the 2020 election was stolen. Friedman believes that a bipartisan ticket comprising a Democrat and a Republican who hasn’t furthered such lies, such as Cheney, could take enough support from Republicans to keep them from winning the White House in 2024.

“America is facing an existential moment, [political scientist Steven] Levitsky told me,” Friedman writes, “noting that the Republican Party has shown that it isn’t committed any longer to playing by democratic rules, leaving the United States uniquely threatened among Western democracies.”

Levitsky reportedly said it’s vital the “Trump-cult” GOP never regain the presidency. “There is no reason to believe they would cede power the next time,” Friedman writes.

To him a bipartisan ticket might be just the thing to save America.

A handful of people liked the idea. “A coalition ticket with a democrat and a republican might be a great solution to getting through this era of gridlock and anti-democratic sentiments,” said @Matthew_Slips.

They were by far in the minority. The internet overwhelmingly hates it.

“This is a terrible idea,” reads one of the top comments on the piece. “There are no anti-Trump Republicans. And if there were, they aren’t going to vote Democrat because they will always find some way to justify to themselves a vote for Trump.”

“Stop asking Democrats to negotiate with terrorists while never requesting that the GOP stop indulging in cartoonish supervillainy,” @ScottMendelson tweeted.

Some of the comments were nuanced, such as those who argued that Israel’s parliamentary system isn’t a fitting comparison to America’s constitutional republic.

Others chose brevity over analysis. “Are you fucking high?” wrote one.

One question on many minds: What about Vice President Kamala Harris? Does she just get unceremoniously dumped? (To be fair, Friedman’s bipartisan ticket suggestions include Harris and Sen. Mitt Romney (R-Utah).)

“The black woman gets screwed, of course,” commented @JJohnsonLaw.

The comment section swiftly filled with memes and gifs.

Whether Biden chooses to run again, sticks with Harris, or some other combination emerges remains to be seen.