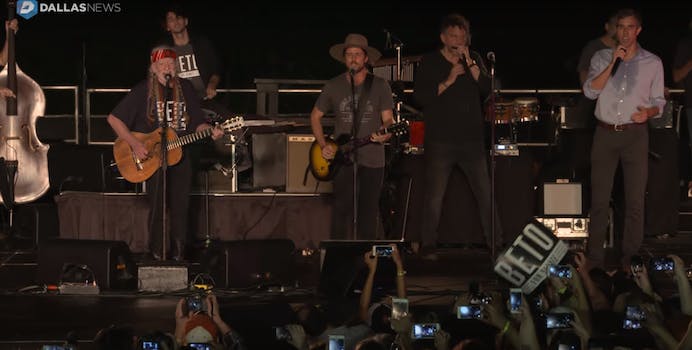 The Senate candidate busts out his musical chops in Austin.

Beto O’Rourke joined Willie Nelson onstage at a campaign event in Texas for a rendition of “On the Road Again.”

The Texas congressman, who played in local punk bands in the ‘90s, busted out his musical chops Saturday at the Austin event. Nelson and Fort Worth native Leon Bridges played a free concert in support of O’Rourke at Auditorium Shores.

O’Rourke joined Nelson during the classic song in a nod to his efforts to visit all 254 counties in Texas, according to the Dallas Morning News.

Nelson has supported O’Rourke against Sen. Ted Cruz, causing some longtime fans to boycott him. Although it’s his first concert in support of a political candidate, Nelson has long supported Democratic candidates for office. It’s unclear why fans are suddenly so angry about Nelson’s political endorsement. But it doesn’t bother Nelson.

“I don’t care,” Nelson told The View. “You know, they’re entitled to their opinions and I’m entitled to mine.”

Nelson also debuted a new song, “Vote ‘Em Out” for the campaign.

Both O’Rourke and Nelson support legalizing marijuana. As the Washington Post points out, over the course of the Texas race, O’Rourke has moved further to the left instead of positioning himself as a centrist candidate in a red state.

Texas has not elected a Democratic for a state office since 1994, but O’Rourke is consistently within spitting distance of Cruz in polls.

“People of the future are counting on us while we can still get this right,” O’Rourke said at the event, where he called for universal healthcare, support of LGBTQ rights, warned of the dangers of climate change, and decried the proposed border wall.