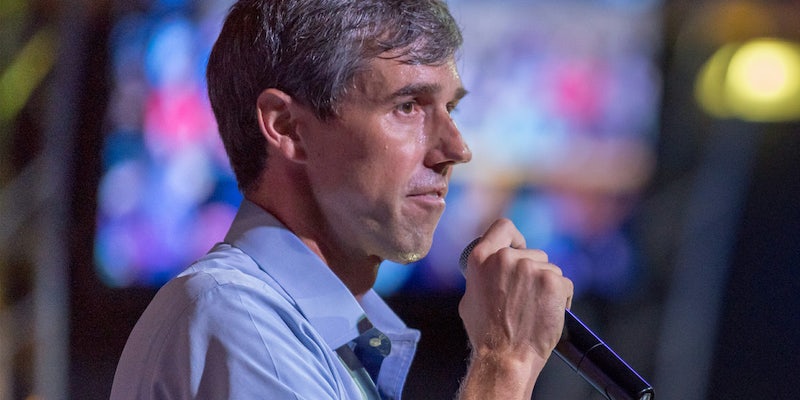 What will Beto O'Rourke fight for?

Beto O’Rourke gained a reputation as a progressive voice in Texas during his insurgent Senate campaign that went national.

Although he lost to Sen. Ted Cruz (R-Texas), it raised his profile so much that today he declared he’s running for president in 2020.

What would a Democratic Party led by O’Rourke look like? It’s hard to say. If you look closely at O’Rourke’s policy proposals, he isn’t in line with the progressive wing of the party, led by figures like Bernie Sanders and Alexandria Ocasio-Cortez. On issues like the economy and immigration, he is center-left at best. However, he offers a solid liberal response to reactionary conservatism when it comes to other issues like marijuana and guns.

O’Rourke ran a pragmatic 2018 campaign aimed at both energizing the Democratic base and potentially picking off more moderate Republicans. However, in a 2020 field that’s being populated by progressives, can Beto’s just left-of-middle stance sweep the country?

Can O’Rourke’s particular mix of issues lead to victory? Take look at his stances and judge for yourself.

The Beto O’Rourke platform does not support Medicare for All. Like the bulk of establishment Democratic candidates, O’Rourke focuses his healthcare policy on protecting the ACA and expanding Medicaid.

Like many Democrats, O’Rourke’s website says he supports “creating a public option” and “achieving universal healthcare coverage,” but he has yet to outline a clear vision for the future of healthcare on the campaign trail, and he has not come out in support of Medicare for All. In short, while O’Rourke says he supports universal healthcare, he has yet to support any of the popular plans that have laid out a path to achieving it.

On the issue of immigration, O’Rourke has also positioned himself toward the center of today’s discourse. Like the majority of establishment candidates, he stops short of “Abolish ICE” as a policy position. As with healthcare, he does propose some liberal reforms but is not in favor of transformational change.

Demands like, “End the militarization of our immigration enforcement system, and close private immigration prisons and detention centers that locking up families” and “Pass the DREAM Act and ensure that undocumented immigrants who were brought here as children, known as ‘Dreamers’, find a permanent home and citizenship in the US” fit within Democratic orthodoxy, but are not any kind of radical vision.

O’Rourke also opposes Trump’s border wall. Since it’s likely that it will never be built, this is easy for most Democrats to support.

Phrases like “investment in talent of our country” and “ensure a fair path to citizenship for those inspired by the opportunity and ideals that we present to the rest of the world” offer credence to conservative immigration narratives about meritocracy and nationalism.

There are issues on which O’Rourke does not take a more centrist line. While there have been a number of Democratic politicians, including House Majority Leader Rep. Nancy Pelosi (D-Calif.), who have shown a willingness to budge on reproductive justice, O’Rourke is uncompromising when it comes to women’s right to choose.

On his website, O’Rourke says he has the goal of, “ensuring that a woman’s right to choose is not compromised by limited access to safe and legal abortion services or family planning help.” He also supports “policies that guarantee a woman’s access to birth control and emergency contraception.”

As a congressman, O’Rourke earned a 100 percent approval rating from the Planned Parenthood Action Fund.

With his views on jobs and the economy, O’Rourke most clearly shows how he tries to marry pragmatic views that will appeal to moderates with a smattering of more progressive ideas.

In the “Jobs” section of his website, O’Rourke echoes the moderate Republican fascination with apprenticeship programs, and he uses the language of “economic growth” when talking about infrastructure improvements. However, he is in favor of the progressive policy of rural broadband expansion and wants to expand family leave.

This Dr. Jekyll and Mr. Biden approach to policy continues with his economic proposals. O’Rourke focuses on “lower[ing] the barrier to entry for small businesses.” Often, this is centrist code for deregulation. He also says he hopes to “promote policies that encourage companies to focus on returning investments back to their consumer, their employees, and to the community.” This sounds like tax cuts, which again, is not a particularly progressive position.

Though he talks about “promoting regulations” and “supporting stronger antitrust [laws]” he once again hedges, saying that he also wants to “promote competition and grow the economy.”

O’Rourke’s education policy is a bit more uniformly progressive, although he does not provide as clear a vision when it comes to student loans.

Instead of a bold stance like free public college, his student loan policies are filled with half measures like expanding Pell Grants and promoting trade schools and “nanodegrees.” O’Rourke also frames student debt in terms of meritocracy, saying he wants to “allow Texans who commit to working in in-demand fields … the chance to graduate debt free.” He also explicitly commits to “controlling inflation” of students loans rather than changing the system completely.

This is perhaps O’Rourke’s weakest stance when it comes to progressivism.

“We’re at war in six countries right now and fighting enemies that didn’t exist when Congress authorized the global war on terrorism following 9/11. We need to support our service members by ensuring this country has defined victory, has adopted a comprehensive strategy to achieve it, and is willing to commit the resources and leadership to see it through.”

Here, again, we see O’Rourke trying to appease a broad range of Democrats who have never quite been in lockstep on foreign policy. He criticizes our endless war but doesn’t suggest it end immediately. After 17 years of the War on Terror, he still speaks in terms of victory.

O’Rourke’s policies are as non-committal as his foreign policy rhetoric. He argues for “necessary financial resources” for military bases, “a debate and vote to give guidance to our military,” and “work[ing] with our military leaders to clearly define victory.” Not a lot of concrete issues there.

His proposals when it comes to veterans are a little more substantive, including bringing an end to veteran homelessness, providing veterans with mental health treatment, and increased support for the VA.

The progressive position O’Rourke is best known for is legalizing marijuana (which he views as a path to decreased gang violence). However, a number of states have already legalized weed, so it’s hard to say how bold a policy position this really is. Additionally, O’Rourke advocates for some of the liberal criminal justice reform proposals gaining popularity in the U.S., including eliminating private, for-profit prisons; bringing an end to mandatory sentencing; and ending cash bail, while stopping short of the kind of institutional criticism coming from groups like Black Lives Matter or Democratic Socialists of America.

O’Rourke supports background checks for all gun sales, closing the gun show loophole, ending concealed carry reciprocity, and supporting gun research. However, again, O’Rourke stops short of a bold progressive position when it comes to firearms. The Beto O’Rourke platform references banning the most deadly assault rifles on the campaign trail. Still, there is no evidence on his website that he supports an assault weapons ban.

O’Rourke touts the fact that he is a gun owner on the campaign trail but also holds an “F” rating from the NRA.

There are a variety of ways that you can view the Beto O’Rourke platform and policy positions. While it came across as progressive in Texas, it’s possible that Beto will be milquetoast in a 2020 race that is shaping up to be radical. And if in office, it’s likely to expect more Obama-era incrementalism than something more drastic that reshapes the nation.

If that’s what voter’s want, Beto will be a sure bet.