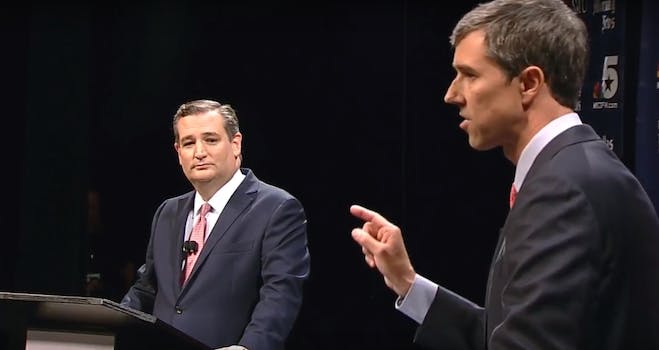 The Texas Senate race simmers to a boil.

Toward the end of the hourlong debate, O’Rourke, the former punk rock bassist who in recent weeks has become a viral Hollywood darling, shouted out London genre pioneers the Clash, and said that Cruz was working for “the clampdown.” In other words, working for the man and the establishment.

“Clampdown” was a single from 1979’s London Calling.

OMG @BetoORourke just said Cruz is “working for the clampdown”!

On Twitter, both candidates’ names trended as “Ted Cruz” tweets in the U.S. topped out at just shy of 70,000, while “Beto” tweets got to 132,000. There were nearly 45,000 “O’Rourke” tweets as well, and all three terms became top trends in the U.S. The tweets may lean toward O’Rourke, but as the congressman said onstage at Southern Methodist University, 50 percent of rural Texans don’t have reliable access to broadband internet. (Polls have the race as a statistical dead heat.)

For his part, the incumbent had to justify his recent ties to the president early in the debate.

“He took shots at your wife and father … You called him a pathological liar,” moderator Gromer Jeffers, of the Dallas Morning News, said, asking why he eventually became a friend of the White House. Cruz responded that “Texans’ lives are better” because the Republicans won the presidency in 2016, and he didn’t want to be a sore loser.

Both candidates tried to show that they were the right blend of hat and cattle to represent the Lone Star State in Washington, D.C., consistently positioning themselves as regional populists with a strong community service record. Cruz called O’Rourke “out of step with Texas,” and O’Rourke responded that “only one of us has been to each county in Texas.”

There was namedropping of rural Texas areas, too. Beaumont! Sweetwater! Roscoe! O’Rourke asserted that “all 254 counties wonder where their junior senator is.” Cruz said that O’Rourke was “out of step” with Texans as a liberal. O’Rourke shouted out his “uncle Raymond,” who taught him to shoot a firearm and was in law enforcement.

Cruz said that Dr. Martin Luther King would not have “stood for” Colin Kaepernick’s national anthem protests, during which the NFL player famously kneeled pregame to bring awareness to police-involved violence. He also said that O’Rourke was more to the left on policy than Sen. Nancy Pelosi (D-Calif.) and Sen. Bernie Sanders (I-Vt.); O’Rourke did what he could to distance himself from modern Democrats.

“I could care less about any party at this moment,” O’Rourke said.

The internet Likes may be with O’Rourke, but in terms of policy points, Cruz scored decidedly more cheers from the campus crowd. The two will debate twice more before Election Day.