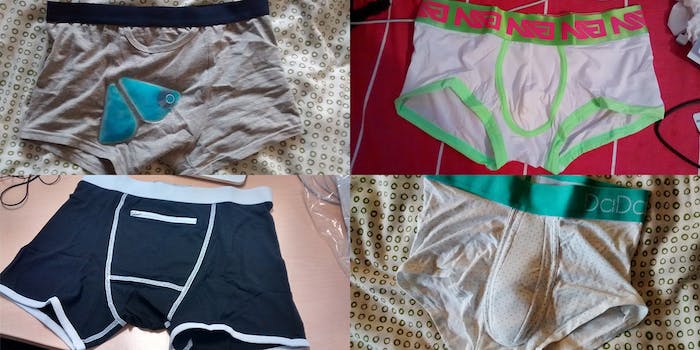 I tried the most innovative underwear crowdfunding can buy

And my whole lower half is numb from sticking ice down my pants.

I’m at a house party in North London, gin and tonic in hand, flirting with a friend’s coworker, and I seriously regret having stuck two ice packs down my underwear before I left home. I feel the opposite of sexy. Actually, I feel nothing at all. My whole lower half is numb, my manhood entirely receded into my body. But that’s the price you pay to test the most disruptive underwear the Internet has to offer.

With crowdfunding, it’s easy to be distracted by the the extremes of the industry: highly disruptive, multimillion-dollar success stories at one end, brazen scams and pseudoscientific disasters at the other. In 2012, however, more than $2.7 billion was raised via crowdfunding—a figure that has no doubt increased dramatically.

Crowdfunding has unleashed a wave of creativity and innovation in the dong-containment sphere.

I set out to road-test the most exciting, interesting, and bizarre crowdfunded men’s underpants on the Web. It was an attempt to shed some light on this criminally underreported industry. It was also because I desperately needed some new underwear.

The underpants DaDa offers are simple enough: “Trunks,” “shortys,” and “retro” in a range of styles, in either bamboo or organic cotton and ethically produced in Sri Lanka. What makes them stand out is the “Quarterly Underwear Club”—a subscription service that provides the customer with a new pair every few months to keep things “fresh.”

I felt like I was wearing a pair of Depends.

Asking for a relatively modest $15,600 on Kickstarter, the campaign eventually raised more than $23,000 at the tail-end of 2012. Since then, the company has grown “relatively slowly,” founder Hamish Lawson told the Daily Dot, “seeing what works and learning from mistakes.” They’re now gearing up to launch experimental fabric blends including “seaweed and coffee grinds” in the new year.

So how are DaDa underpants to actually wear? With all the products tested, I refused to specify a preferred cut or color. “Surprise me,” I said. And so DaDa did, with a striking cyan polka-dot number, replete with an “enhancing” “comfy pouch.” 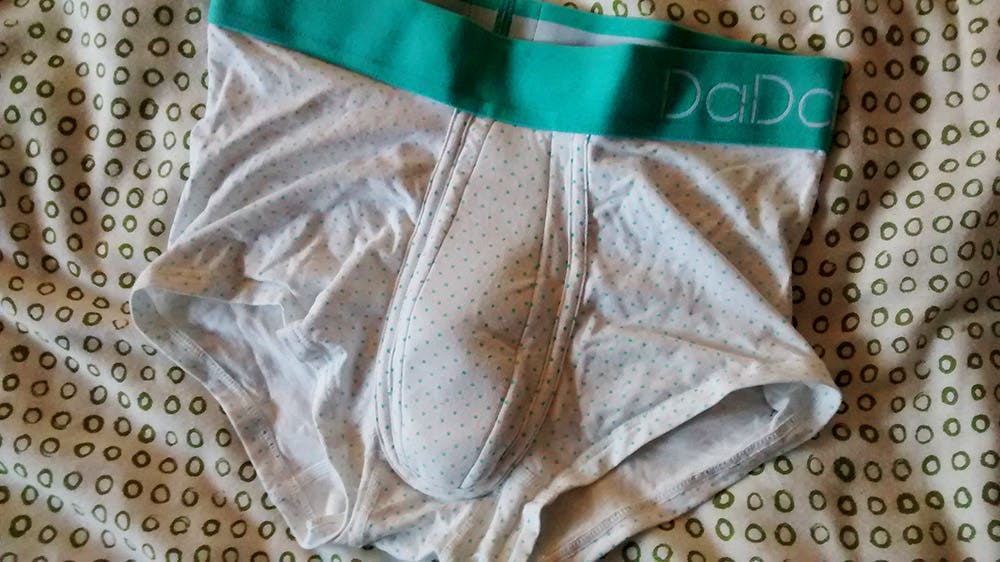 It’s designed to “[make] men feel more comfortable in their underwear,” Lawson told me, and the multiple layers of fabric is certainly easy on the crotch. While it may do wonders for the less-endowed man’s self-esteem, the shortness of the leg combined with the unusually thick fabric made it feel like I was wearing a pair of Depends.

In the broader underwear industry, Lawson says, “there have been some very impressive marketing campaigns lately,” but he’s “waiting for more innovation in the actual product.” The subscription model—also gaining popularity in everything from shaving products to vegetable deliveries—is arguably one such innovation. The comfy pouch? I’m less convinced.

Speakeasys claim to be “the greatest pair of men’s boxers this side of prohibition,” and on that note, they offer a very unique selling point: a crotch-level pocket for storing hip flasks and other assorted goods. 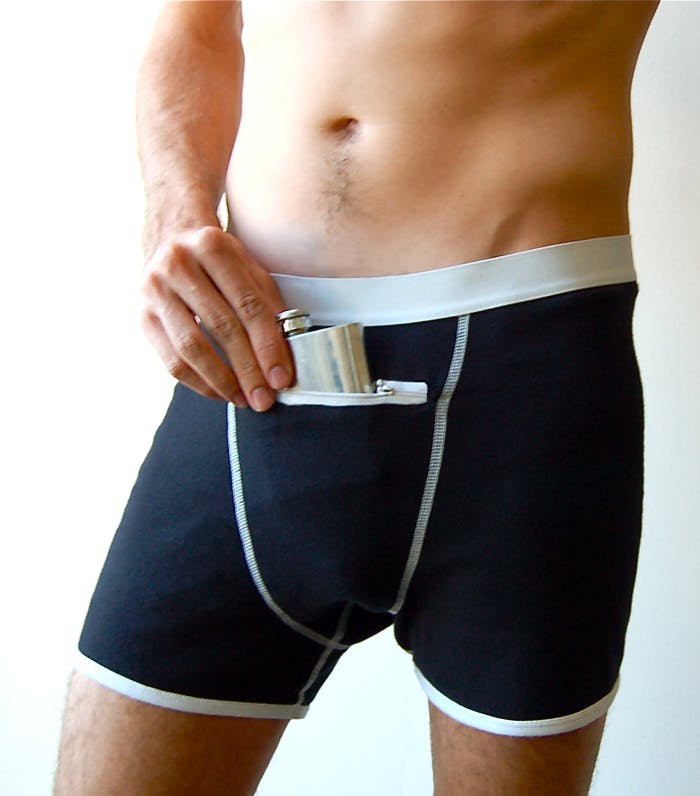 Arguably perfect for the man on the go (or the casual alcoholic).

The brand’s two suggestions are “passports” and “condoms.” Having chosen a crowdfunding model because it allowed the company to “retain complete control of [its] vision,” Speakeasys cofounder Dan Goldman told me, the campaign clearly appealed to the public’s imagination—breezing past its initial goal of $10,000 and eventually raising more than $32,000.

The fit is, frankly, excellent. The Speakeasys offer good support without being too tight, though the pocket may divide opinion. Arguably perfect for the man on the go (or the casual alcoholic), it is nonetheless extremely hard to retrieve items from the pouch in public without looking awfully inappropriate. 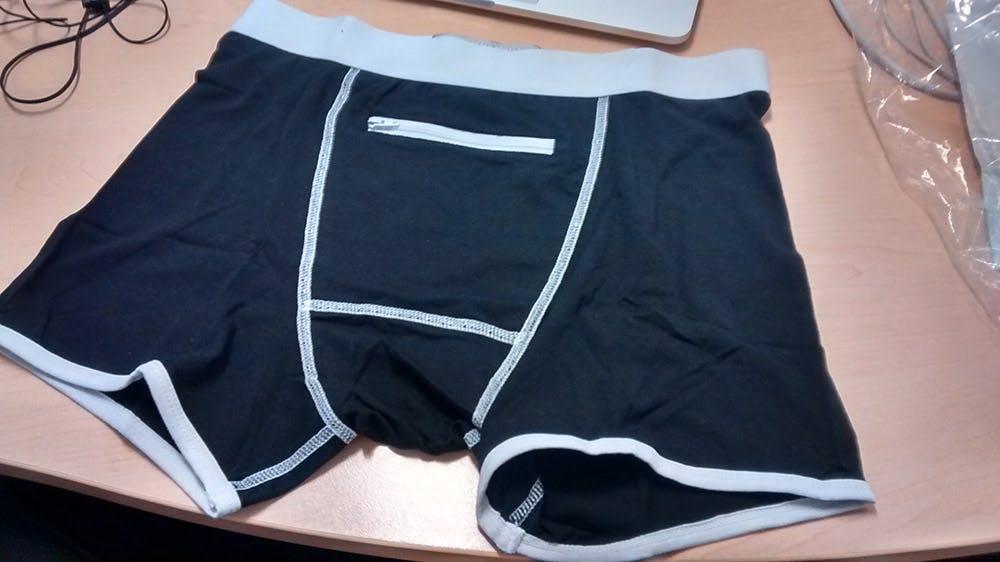 The crowdfunding industry delights in novelty and bucking convention, and underpants are clearly no exception to this. Speakeasys have found a niche, and the company is expanding fast—and yet I came to realize that I’d be far more likely to wear the underpants day-to-day if they didn’t have the zip pocket.

This is not underwear for the faint of heart. 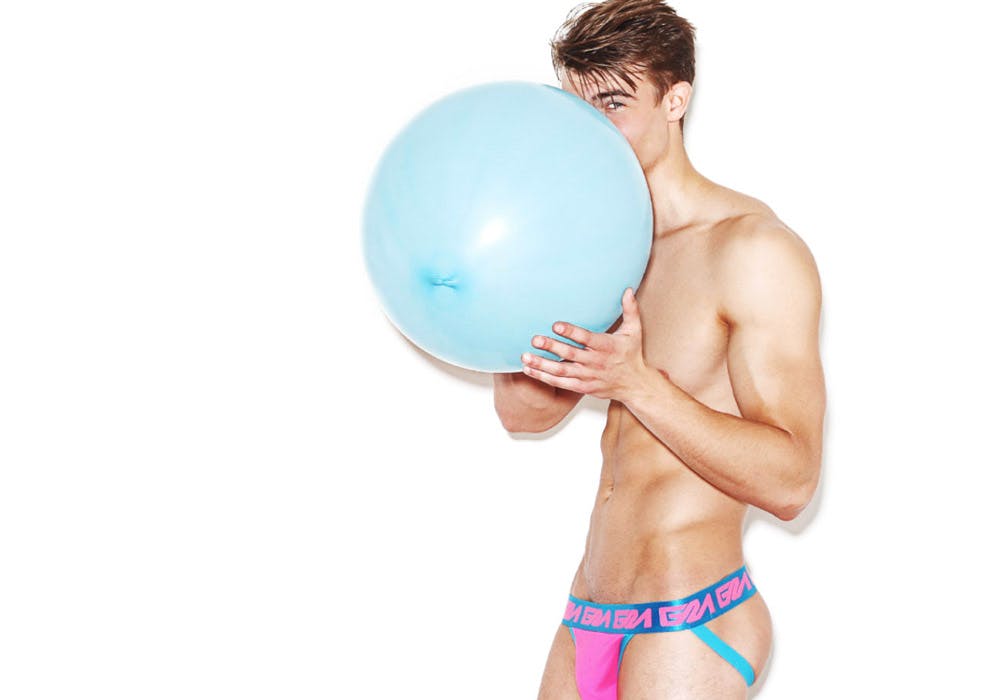 Explicitly marketed as “[striving] for perfection” and trying to “rejuvenate the premium mens underwear market,” Garçon Model underpants are “young, fresh, sexy, and tasteful.” (At least this is what VP of International Sales Mehdi Mebarki told me.) That may well be true, but the Garçons are also not discreet. The company shipped me a pair of bright white briefs with lime-green piping, a metallic-green waistband, and neon-pink detailing. 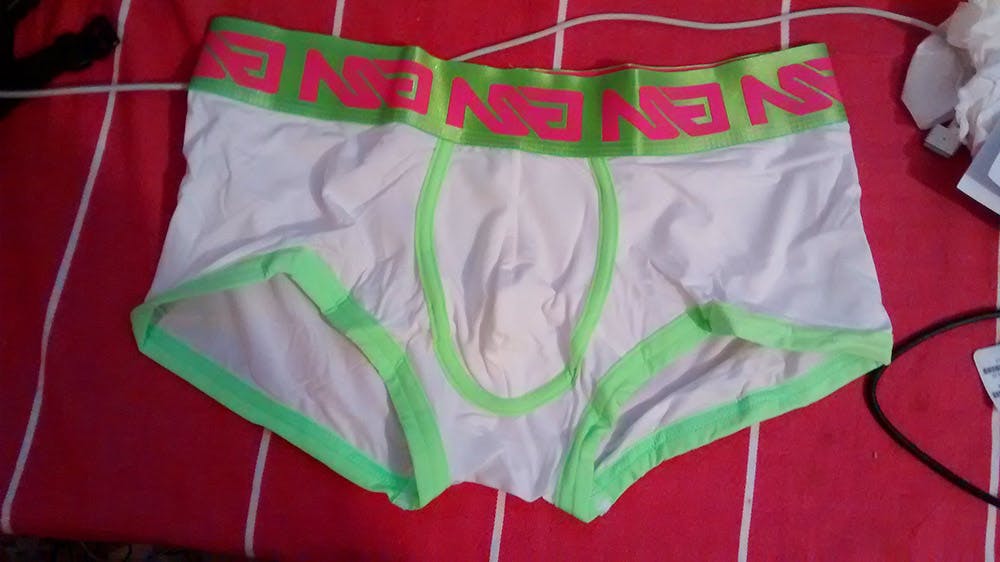 Pairs retail from $28 and up, available from the company’s site. The successful January 2014 crowdfunding campaign raised $22,820 of an $8,600 goal. Materials feel high-quality. The fit is an acquired taste, however, best described as “budgie-smuggling.”

Mebarki lauds crowdfunding as “the new way of doing business in a more open, equalitarian way”—yes, “equalitarian”—and the increased choice and “awareness” this provides can only be a good thing. I’m afraid to say, however, that my pair will not be repped any time soon.

Yep. Remember my icy bollocks? Read on for the full story.

While the Speakeasys position themselves as mischievous, Snowballs are underpants with a noble purpose: tackling male infertility. “Male infertility accounts for roughly 40% of all infertility,” Snowballs’ promotional material tells us. The No. 1 cause? “Elevated scrotal temperature.” Snowballs’ solution to this is exactly as the name suggests—stuffing ice packs down your briefs.

My pair arrived with this enlightening literature: 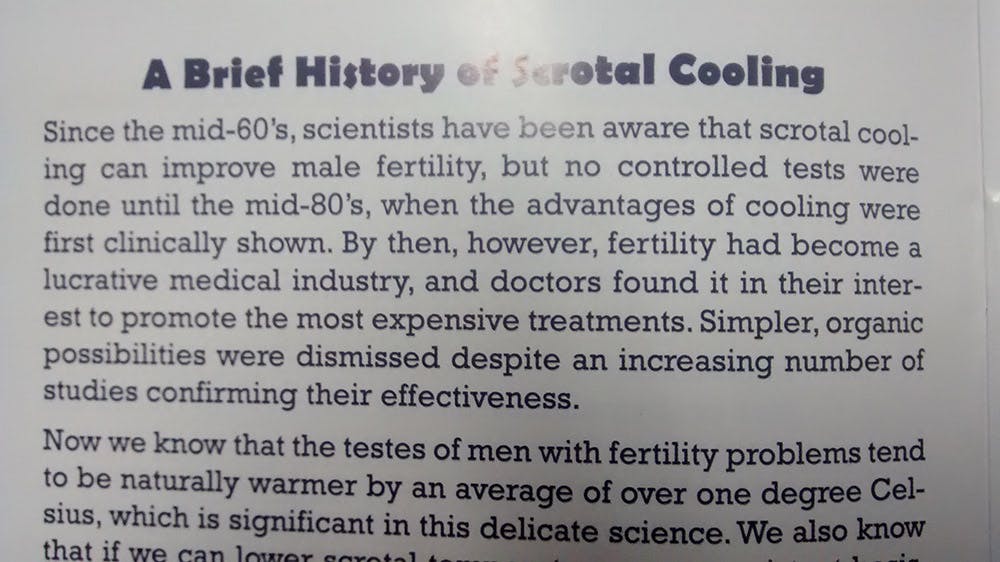 Coming in a two-pack, along with three custom-shaped ice packs, the Snowballs are a snugger fit than some of the other underwear I tested—perhaps not ideal for pants designed to combat toasty scrotums. 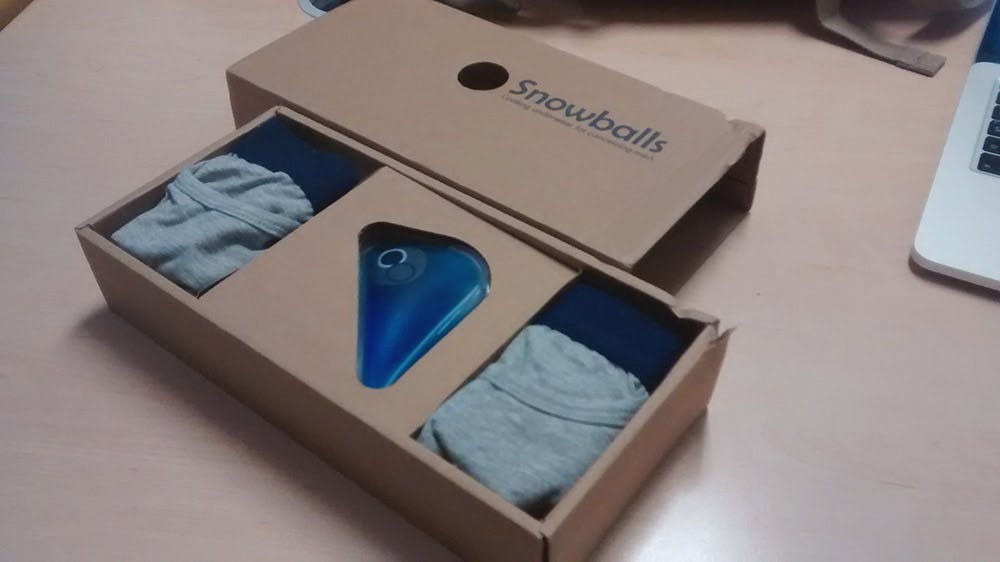 There’s no danger of overheating once you have the ice packs equipped in the custom front pouch, however. Gods, it is cold. Bone-chillingly, teeth-rattlingly, ball-numbingly cold. So cold, in fact, that I had no check that I was indeed supposed to be keeping the packs in the freezer rather than the fridge. But nope, apparently the fear of frostbite is to be expected.

The removable ice packs are ideal for tackling migraines, however—so long as you can avoid explaining to your flatmates the true purpose of the custom ball-coolers pressed to your temples. 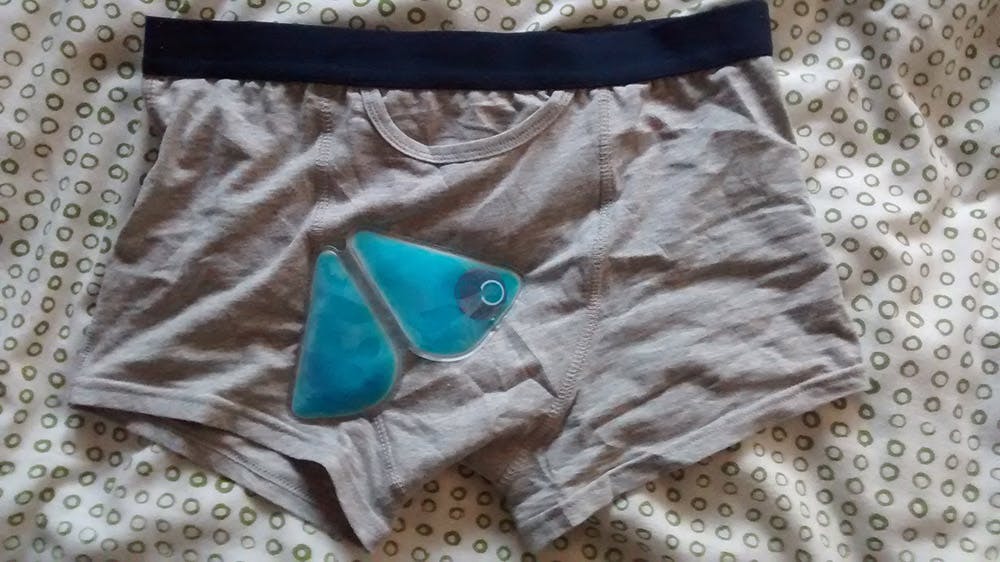 Snowballs are unique among the products I tested: This company didn’t actually achieve its goal on Kickstarter, raising a little more than half of the $20,000 asked for—a failure that founder Joshua views as a blessing. The campaign raised massive amounts of publicity: “Before I could even start emailing the press,” Joshua told me, “my inbox was flooded with article and interview requests.” It meant they could “[avoid] the fulfillment nightmare that would have ensued after the inevitable delays, change in supplies, etc.”

Instead, after ultimately raising funds from family friends, “when the first pack of Snowballs went out, it was a sale rather than an obligation. I think there’s a difference in psychology between those two situations,” Joshua added. “In one you feel as if you’re behind from the start. In the other you feel as if you’re ahead.”

My verdict: The Snowballs know their audience and cater to it well. They’re also simple and discreet enough to double as regular underpants (sans the ice pack). Keep the prominent “fertility-boosting” promotional materials away from one-night stands, however, unless you want some very strange looks.

Billed as “underapparel for the overachiever,” SWAV underpants feature a utility pocket on the hip and make use of “NASA technology” to produce what they claimed is “the most comfortable, odorless, and moisture-repelling men’s underwear, ever.” After raising $57,138 on Kickstarter in November 2013, its products are now available to buy online.

Wireless Armour are a Britain-based underwear company that promises to protect you from “electromagnetic radiation” and its reportedly deleterious effects, such as cancer risk and reduced sperm count. It’s a high-tech Snowballs, if you will. After a flexible funding Indiegogo campaign in June 2014, the company is currently undergoing a rebranding, and the product relaunches in January 2015.

The allure of UFM Underwear was its “patent-pending, adjustable” sizing, thanks to the inclusion of drawstrings. The crowdfunding campaign bombed, however; just $631 of the $20,000 goal was raised.