In the same way that advances in computing power have made graphically and technically impressive, it’s also made sim games more realistic. Naturally, gamers being gamers, they can’t let a game’s framework go unchallenged or its boundaries untested.

Here’s what happens when you push simulation games to their absolute limits. (Spoiler: It gets really, really weird.)

Soccer is already a sport with a rich background, especially built into England’s Premier League, but it’s never had as extensive a history as the one created during the Millennial Sim. Using Football Manager 2015, a Redditor simulated 1,000 years of soccer in the Football League, the multi-tiered system of professional and amateur soccer in England.

By the time the year 3015 came along, the world’s game had produced some interesting surprises. Sheffield United, a squad that isn’t even in the top tier of English soccer, managed to capture the most Premier League titles. The second most successful team, Burnley F.C., is also anything but a powerhouse in real life. But there’s more precedent sent by the Millennial Sim than has been established in reality; the sim goes for 1,000 years while the Football League has been in existence for just over a century and a quarter.

The Millennial Sim also found the boundaries of what Football Manager 2015 is possible of. Part of the way through the sim, the attendance data went wonky and led to teams with a 60,000-capacity stadium drawing crowds of over 600,000 a game. Meanwhile, an FA Cup event—one of the most exciting competitions in the sport—only drew 14 people one year. But for the most part, the game held up for an entire millennium of soccer, an impressive feat on its own.

Sid Meier’s long-running Civilization franchise is a staple in the strategy game world. The games pit leaders from throughout history on the same playing field and challenges them to build up a nation from scratch. Most matches consist of just a handful of civilizations going head-to-head in a race to achieve supremacy, be it by economic, religious, or military prowess. But Civilization V has made players up the ante and fill maps with factions and watch what happens.

The first of the massive battles placed 42 civilizations on a map. With the victory conditions for the game set to “Domination,” the only possible way to win was by eliminating all 41 competion nations. The epic match was well documented by the /r/Civ subreddit, which launched the all-out war with the intention of kicking back and seeing what would come of it.

So what did come of it? Well…nothing. On turn 239, the game crashed. The unfortunate limitation of the game’s processing power put an end to the attempt at an all-out, worldwide war that one hope could only happen in a video game.

The story of the Battle Royale doesn’t end after the fall of the 42 nation game, though. How does one respond to such a huge collection of civilizations on screen at once crashing the game? Why, by adding more, of course. A relaunched version of the Battle Royale has started and features 60 civilizations, including user-created ones like King David, Hannibal, and Hitler.

It’s still early in the Battle Royale’s second go-round, which means there is plenty of time for things to go terribly wrong. But the event has produced a dedicated community that rallies around the nations and produces content based on the actions that happen in game. The warfare taking place in game is bringing people together outside of it.

3. The Perfect City in SimCity 3000 is a Totalitarian Regime

If running an entire nation seems like too much of a task, there’s always SimCity. The city management game has always been a favorite of sim-style players who take pride in the surprisingly enjoyable experience of city planning.

The thing about most simulation games is there isn’t a cut and dry ending. You make decisions and the game shows you how those plans play out within its intricate algorithms. There is no real “winning.”

That is, unless you’re Vincent Ocasla, creator of SimCity 3000 terrorscape Magnasanti. In terms of game stats, Magnasanti is technically the perfect city. It reached a population of 6 million and lasted 50,000 years—a dynastic city if there ever was one. The layout of the metropolis is meticulously planned, sketched first on graph paper and eventually built within the game world. The entire thing is optimized to an extent that the game developers likely never even imagined.

Oh, and it’s also a totalitarian dystopia fresh out of an apocalyptic sci-fi novel. No one ever leaves the city and there is no crime thanks primarily to an aggressively dictatorial police force. Air pollution makes stepping outside suffocating, and a lack of schools, hospitals, and fire stations to protect and serve the citizens best interest make it clear the people of Magnasanti are only there to serve as cogs in the machine-like structure of the city.

4. The Year the Professional Basketball Ended in NBA 2K14

Jon Bois of SBNation has made a name by taking sports simulation games and pushing them to their breaking point. His “Breaking Madden” series has turned the perennial Madden football franchise into a world where anything is possible: teams of tiny weaklings and giant, athletic demigods go head to head; players switch to unnatural positions; the rules are tweaked to disastrous results; unbeatable records are broken.

But Bois’ masterwork is “NBA Y2K,” in which he dismantles the entirety of professional basketball in NBA 2K14 by infusing the league with talentless scrubs until the game becomes entirely unwatchable.

Starting in the 2015 draft, Bois took a created draft class that consisted of players who were 5’3” tall, 145 pounds, and given a rating of 0 out of 100 in every basketball skill. Every year, only players of this build are injected into the NBA. They stick because teams need to fill out their rosters, but they don’t immediately take hold because there is still enough actual talent in the league to survive.

By the 2020s, the NBA starts to feel the effects of Bois’ tinkering. A Miami Heat team with with two real players and 13 “Doomsday” players suffers the worst season any team has ever mustered by finishing with a 7-75 record. Soon, the Heat is joined by other teams that cannot field a professional quality team—until that becomes the standard.

In the year 2034, game one of the NBA Finals takes 12 overtimes to decide a winner. When the dust settled on the longest game in NBA history, the Orlando Magic won 3-0. It took four quarters of regulation and 12 additional periods for a team to score a single basket. At that moment, basketball as we know it was dead.

5. A ride in Roller Coaster Tycoon that lasts four years 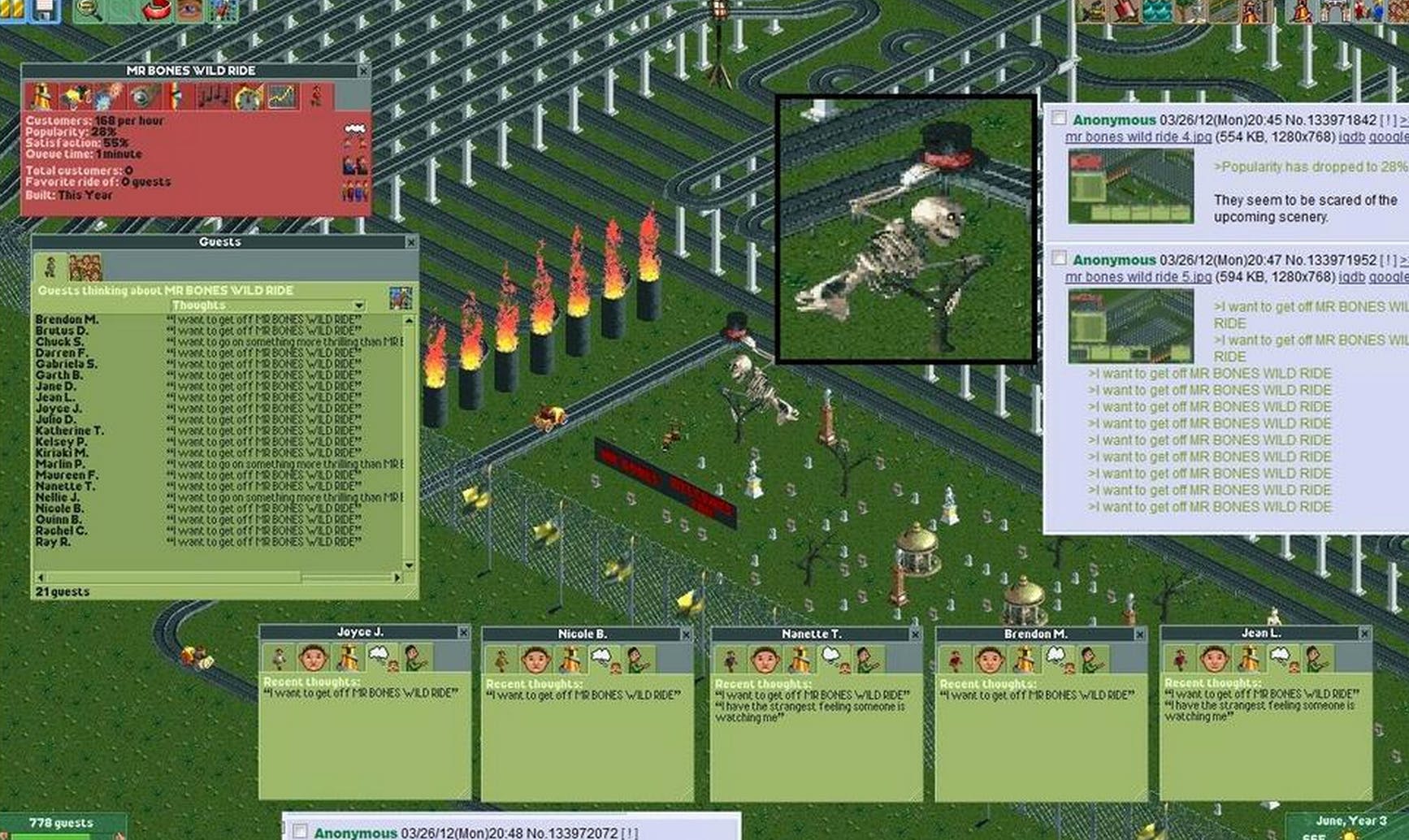 Sometimes on the Internet, like with any medium in which people pass along stories second- and third-hand, a tale can grow taller over time. Whether the legend of Mr. Bones’ Wild Ride—the longest ride ever built in Roller Coaster Tycoon—is actually real is unclear. But then again, it’s also unclear if it really matters. There’s just enough documentation and plenty of mythology built up around it to make it believable and for the Internet, that’s good enough.

Originally found on 4Chan, Mr. Bones’ Wild Ride is probably the most impressive feat anyone has ever (supposedly) accomplished within the Roller Coaster Tycoon world.

The game is meant to put players at the helm of their very own amusement park and allow them to create rides that will attract customers and make them leave happy. Mr. Bones’ Wild Ride is one hell of an attraction, but it’s harder to tell if it leaves customers satisfied because once they get on, it’s a long wait until they get off again.

Built with 30,696 feet of track—a little over 5.8 miles—the ride just does not stop. Seventy minutes of real-time and one month of game time, the riders are still strapped into their cars. One year passes and the riders are getting hungry and thirsty. After year four, they are finally relieved by the cars coming to a stop and the safety rail letting them out of their seat. After nearly 1,500 days trapped on a rollercoaster, the riders—who got lured in by the promise of free admission—are finally allowed to exit.

Sadly for them, there is but one path coming from the end of Mr. Bones’ Wild Ride. And that lone route leads directly back to the entrance, forcing them to start all over again.

6. Ten years into a Civilization II sim, the world is ravaged

Civilization V might be playing host to a massive battle at the moment, but earlier editions of the franchise are just as capable of being agents of chaos. One Redditor proved this three years ago when he posted a summary of a Civilization II save that he had been playing for more than a decade.

By the time he shared the game with the world, he was locked in a stalemate. Unlike the Battle Royale in Civ V, Redditor Lycerius was actually controlling a nation himself. Playing as the Celts, he had survived an incredible amount of destruction and millennia-long warfare to be one of three world powers that remained. Along with the computer-controlled Vikings and Americans, Lycerius was fighting to be the last nation standing.

His game, dubbed the Eternal War, had reached the year 3991 AD, and had seen the Earth experience a mass extinction of humanity. According to Lycerius, the population of the world peaked around 2000. By late game, 90 percent of humanity had been wiped off the face of the planet. Nuclear war destroyed much of the globe, melting the polar ice caps an upwards of 20 times and sparking global warming events that made the land completely unusable for farming. Famine afflicted the planet and a war had been waging for over 1,700 years. According to the game, 1.586 billion lives have been claimed by the fighting.

Lycerius didn’t just share the story of his game on Reddit; he shared the save file itself. This gave other interested gamers access to everything he has accumulated over his ten years of playing. This created a branch of results, including a resolution to the war that took 58 additional years in game to achieve. It didn’t quite meet Lycerius’ wish of cultivating the planet and restoring it to its glory days, but anything that ends a war of 17 centuries is surely a victory.