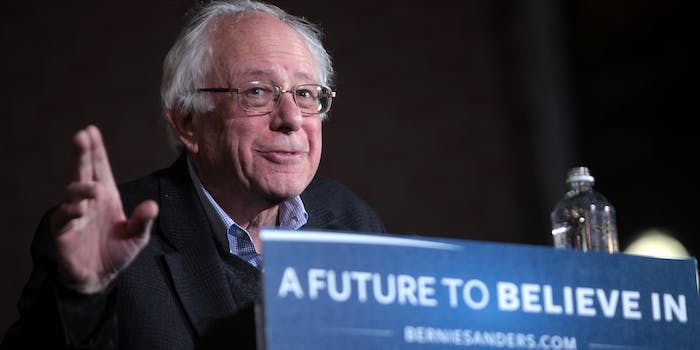 The Bern just got even hotter.

In the biggest upset of the 2016 election so far, Bernie Sanders narrowly beat Hillary Clinton in the Michigan primary on Tuesday night.

Sanders earned 50 percent of the vote to Clinton’s 48 percent, with 99 percent reporting.

The win by Sanders bucked predictions by pundits and pollsters alike. Sanders trailed Clinton by an average of 21.4 points in state polls leading up to Tuesday’s primary vote. The data scientists at FiveThirtyEight.com, led by famed analyst Nate Silver, gave Clinton a “greater than 99 percent chance of winning the Michigan primary.”

“If Sanders winds up winning in Michigan, in fact, it will count as among the greatest polling errors in primary history,” Silver wrote on Tuesday evening.

“What tonight means is the Bernie Sanders campaign, the people’s revolution … is strong in every part of the country,” Sanders said during a impromptu speech late Tuesday night. “And frankly, we believe that our strongest areas are yet to happen.”

Sanders’s unexpected win in Michigan, which holds an open primary, was helped by support from independent voters, who largely supported the independent Vermont senator, according to CNN exit polls. Clinton, however, won among registered Democrats.

Sanders and Clinton will nearly split Michigan’s 130 delegates, with the Vermont senator taking 65 delegates to Clinton’s 58. Clinton, who won Mississippi on Tuesday, will secure 29 of that state’s 36 delegates, giving her the bulk of all delegates that were up for grabs Tuesday night. Sanders won four delegates from Mississippi.

Clinton will remain well ahead of Sanders in total delegates, 2,383 of which are needed to land the Democratic nomination. The former secretary of state has secured 745 delegates to Sanders’s 540 delegates. Clinton has support from an additional 461 superdelegates, who can change their vote. Sanders has 25 superdelegates.

Regardless of delegate math, Sanders’s victory in Michigan is likely to change the conversation about his candidacy’s viability.

Clinton and Sanders now face major contests in Ohio, Florida, Illinois, Missouri, and North Carolina on Tuesday, March 15. That night’s primaries put in play 792 of the 2,383 delegates—33 percent—needed to win the Democratic nomination.