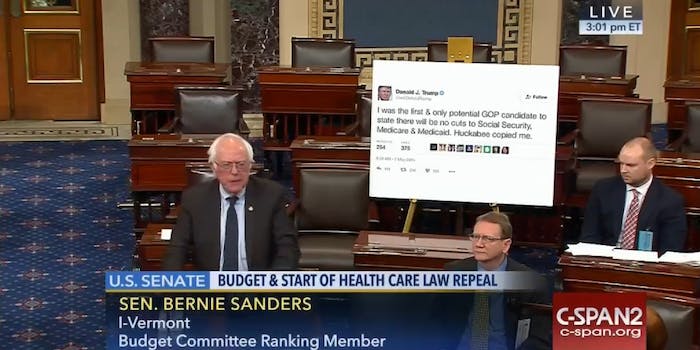 Of course, this is already a meme.

Sen. Bernie Sanders on Wednesday used President-elect Donald Trump‘s words against him in a big-league fight against cuts to federal assistance programs.

Sanders, who rose to political prominence in his campaign for the Democratic presidential nomination, printed a giant version of one of Trump’s tweets to highlight his campaign pledge to keep Medicare and Medicaid intact and brought it to the Senate floor during a debate over repealing Obamacare.

Here’s the Vermont senator’s full speech on the issue. The giant Trump tweet makes its glorious appearance at about 10:20.

Here’s the original tweet, posted in May 2015. This was actually more than a month before Trump declared his run for president. Still, Trump did repeatedly say during his campaign that Republicans should not cut Medicare or Medicaid, which they are currently preparing to do.

I was the first & only potential GOP candidate to state there will be no cuts to Social Security, Medicare & Medicaid. Huckabee copied me.

Regardless, Sanders used the enlarged Trump tweet to drill home his argument against cutting funding for health care on which millions of Americans rely—including many Trump voters.

“Millions of people voted for him on the belief that he would keep his word,” Sanders told his fellow senators. “If he was sincere, then I would hope that tomorrow or maybe today he could send out a tweet and tell his Republican colleagues to stop wasting their time and all of our time. And for Mr. Trump to tell the American people that he will veto any proposal that cuts Medicare, that cuts Medicaid or that cuts Social Security.”

The Trump tweet was apparently carted to the Senate floor by Sanders’ deputy communications manager, Mike Casca, who said he got a chuckle out of Sen. Ted Cruz (R-Texas) on his way.

earlier today, sen. ted cruz chuckled when i walked past him carrying this poster. pic.twitter.com/65iAY2106p

Of course, as with anything on the internet these days, Sanders’ creative use of the Trump tweet quickly became a meme.

Now, that’s something all Americans can get behind.