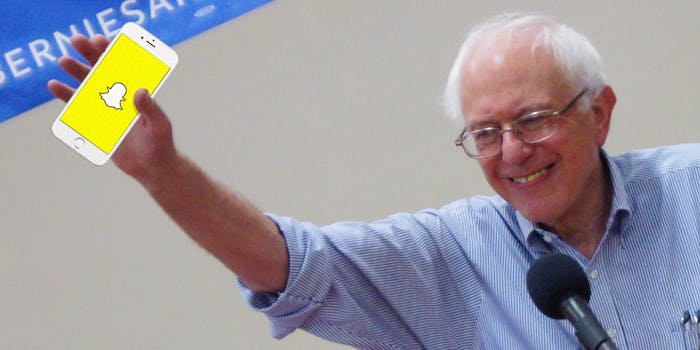 Bernie Sanders joins Snapchat despite having no idea what it is

The Vermont senator called it 'this Snapshot thing.'

Bernie Sanders is now on Snapchat—or, as he calls it, “this Snapshot thing.”

The 74-year-old Vermont senator and 2016 Democratic presidential candidate announced on Monday morning that he has officially jumped on the Snapchat bandwagon.

What is this Snapshot thing and why do I only get ten seconds? pic.twitter.com/5RfsywwE2Z

#Hillary2016 is on Snapchat! Add us: @hillaryclinton 👻 pic.twitter.com/JvDuvXrGIm

It is the Republicans, however, who have made Snapchat a go-to service for reaching voters. The social network’s young user base makes it essential for bringing on board supporters who might not otherwise be paying attention to politics, especially this far out from election day, which is just slightly less than a year away. That’s a lot of time for self-destructing campaign messages.

Photo via Marc Nozell/Flickr (CC BY 2.0) | Remix by Jason Reed