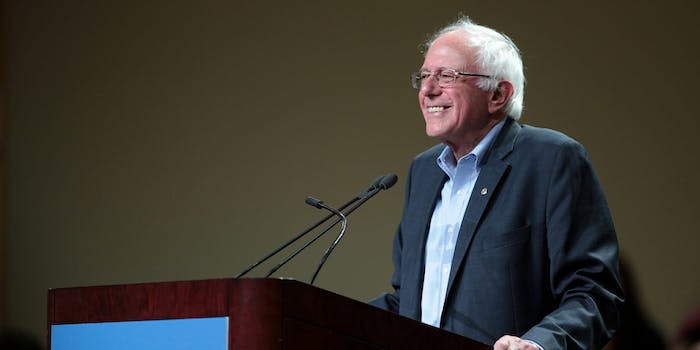 Democrats are still getting on board with the idea.

Sen. Bernie Sanders (I-Vt.) wants to give a job to every American in need of one in a plan that would pay beneficiaries a minimum of $15 an hour and offer them healthcare benefits.

The guarantee would come from federally funding for hundreds of projects that would cover infrastructure, care work, education, and the environment. Every American who needs work would be offered a job and training within one of these projects, according to an early draft of the proposal.

As well as offering the living wage, the jobs would give workers the same benefits as other federal employees, including healthcare, annual leave entitlements, retirement plans, and sick leave rights.

Representatives from Sanders’ office, however, told the Washington Post that financing had not been figured out, and the plan had not been fully costed at this very early stage.

Plans of this kind are reportedly being considered by two other 2020 Democratic presidential hopefuls in what would represent the most significant move to the left in the party’s economic policies since President Franklin D. Roosevelt’s New Deal plans of the 1930s. The plans are arguably catalyzed by Sanders’ promotion of social democratic values in his race against Hillary Clinton for the Democratic presidential nomination.

In recent years the Obama administration preferred partnering with private enterprise to facilitate government policy incentives and aims. This job guarantee plan would represent a directly implemented and independent federal government intervention, one that some mainstream Democrats might not support.

“It would be extremely expensive, and I wonder if this is the best, most targeted use of the amount of money it would cost,” he told reporters.

However, more Democrats have jumped on board with the idea since the Center for American Progress, one of the most influential progressive think-tanks in the country, made a case for a job guarantee policy in May 2017.

“Progressives must articulate a vision for the future grounded in good jobs with good wages and stand up for a government that serves and helps all Americans,” the report read. “A bold jobs plan will not come at the expense of the civil rights of any group—in fact, it will buttress these rights… these solutions and jobs need to reach the communities that were left behind long ago. These areas should be our top priority over the next few years.”

If Republicans could give $1.5 trillion in tax cuts to corporations and the wealthiest among us, why can’t we invest a similar amount in a guaranteed jobs plan for regular Americans who are unemployed and willing to work to better their local community?

Even if the job guarantee becomes a Democratic policy point, congressional Republicans are expected to completely oppose the plan and dismiss it as big government meddling.

“It completely undercuts a lot of industries and companies,” Brian Riedl, a senior fellow at the conservative think-tank Manhattan Institute, told the Post. “There will be pressure to introduce a higher wage or certain benefits that the private sector doesn’t offer.”