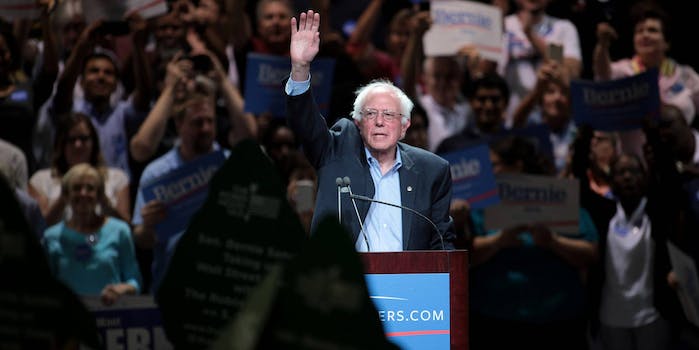 He's got millions Berning a hole in his pocket.

Bernie Sanders’s fundraising is no joke.

The Vermont senator announced Friday that his campaign for the Democratic presidential nomination broke its February fundraising record with a $44 million donation haul in March.

Approximately $5 million of the $44 million raised in March was donated on Thursday alone.

“What this campaign is doing is bringing together millions of people contributing an average of just $27 each to take on a billionaire class which is so used to buying elections,” Sanders said in a statement. “Working people standing together are going to propel this campaign to the Democratic nomination and then the White House.”

Sanders raised $43.5 million in February. In total, the Sanders campaign has raised $109 million for the first quarter of 2016. The donations came from 2 million individual donors and 6.5 million separate donations, according to the campaign.

Democratic front-runner Hillary Clinton also faced a fundraising deadline at the end of the day Thursday, though the former secretary of state’s campaign had not announced its monthly donation amount at the time of publication. The Clinton campaign raised $30.1 million in February.

Clinton, with 1,243 pledged delegates, continues to hold a lead of 263 pledged delegates over Sanders, who pushed his pledged delegate count to 980 last weekend after sweeping caucuses in Alaska, Washington, and Hawaii by wide margins. Clinton also has 469 superdelegates to Sanders’s 31. A Democratic candidate must win 2,383 total delegates to secure the party’s presidential nomination.

The Democratic presidential candidates now head into a heated April 5 Wisconsin primary, where Sanders currently holds a slim 2.2-point edge over Clinton, followed by Wyoming’s April 9 caucus. On April 19, the candidates will battle for voters in New York, Sanders’s home state, where Clinton served as U.S. senator from 2001 to 2009.