Bernie Sanders closes in on Hillary Clinton: A look at the numbers

Bernie Sanders is gaining on Hillary Clinton—but there's one key metric where he falls flat.

Watch your back, Hillary Clinton. There’s a fiery Vermont senator hot on your tail.

Bernie Sanders, the independent senator running against Clinton in the Democratic presidential primary, is riding a wave of public support as the clock ticks closer to Election Day 2016. The latest poll out of Iowa shows Sanders garnering 30 percent of Iowa Democrats’ support—just 7 points behind the former secretary of state and current Democratic frontrunner.

The Des Moines Register/Bloomberg Politics poll shows that Clinton, who has long dominated the race for the Democratic nomination, has lost a third of her support in the state—which hosts the nation’s first presidential caucus—since May.

Clinton still maintains a strong lead in Iowa, however, with an average lead of 21.8 points over Sanders, according to the Real Clear Politics polling average. 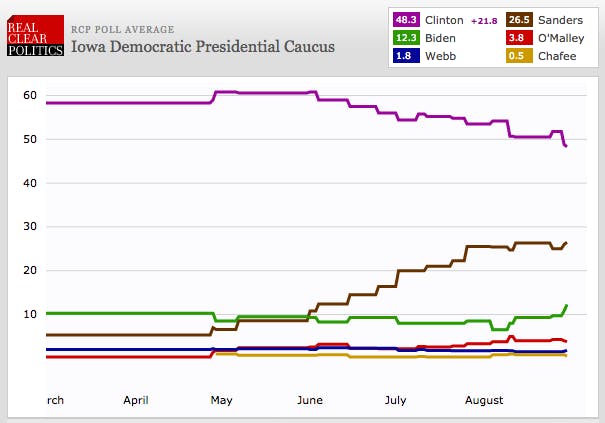 Vice President Joe Biden, who has not declared his candidacy, received 14 percent of the support in the poll, which surveyed 404 likely Democratic voters last week. The poll has a margin of error of 4.9 percent, meaning Sanders could be as far as 12.9 points behind Clinton or as close as only 2.1 points behind her.

Nationally, Clinton’s lead has narrowed to 21.5 points on average; she receives 47.8 percent of Democrats’ support to Sanders’ 26.3. That’s a significant dip from a year ago, when Clinton enjoyed a 61.4-point lead over the Vermont senator.

The narrowing race follows months of scrutiny over Clinton’s use of a private email server during her time as secretary of state. At the same time, Sanders has built a grassroots campaign—fueled by online enthusiasm from communities like Reddit‘s r/SandersForPresident subreddit—that has raised his national name recognition and produced record crowds at campaign stops across the country.

While Sanders’ climb in the polls gives his supporters reason to cheer, other metrics remain firmly in Clinton’s favor, most notably her impressive tally of endorsements from party bigwigs. And as FiveThirtyEight notes, no other factor is as “consistently predictive” in the race for the nomination as party-member endorsements.

Clinton currently has 99.7 percent of the 2016 endorsement from Democratic lawmakers and governors, according to FiveThirtyEight. So far, seven Democratic governors, 29 U.S. senators, and 100 U.S. representatives have endorsed Clinton. Biden has support from Gov. Jack Markell and Rep. John Carney, both from Delaware, the vice president’s home state. Former Maryland Gov. Martin O’Malley has one endorsement, from Rep. Eric Swalwell (D-Calif.).

The number of governors or U.S. lawmakers to endorse Sanders so far? Zero. Sen. Elizabeth Warren (D-Mass.), whose politics hew closer to Sanders’ than to Clinton’s and who declined to run herself despite significant grassroots urging, has not yet endorsed a candidate.

In other words, Sanders is gaining on Clinton among voters, but the Democratic establishment remains solidly in Clinton’s camp.