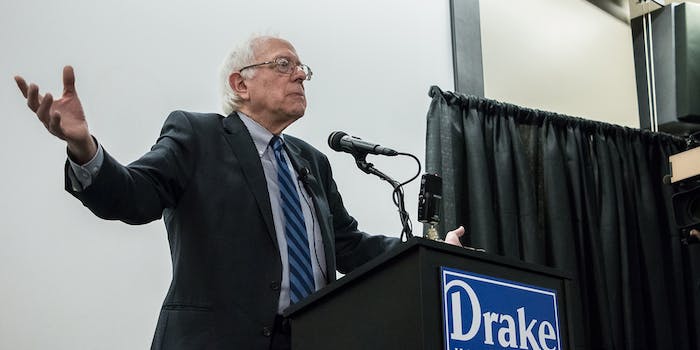 Senator and presidential hopeful Bernie Sanders ribbed Donald Trump for giving out free helicopter rides to kids during a campaign event in Iowa.

Sanders remarked, “Oh look, what can you do? It’s Donald Trump,” as Trump’s helicopter, which is plastered with the billionaire and GOP candidate’s name, buzzed over Sanders’ event in Des Moines. “I apologize—we left the helicopter at home,” he joked. “I forgot to bring it.”

Trump brought the helicopter to the Iowa State Fair, a coveted campaign spot for candidates from both parties, and offered free rides to children. During a speech, he touted his wealth as a campaign asset. He claimed he had turned down a $5 million donation and said he would spend $1 billion on his own campaign “if I had to,” the Hill reports.

Sanders took the opportunity not only to joke but also to critique Trump’s campaign spectacle. He suggested that wealthy candidates like Trump can’t relate to America’s middle class. “We need millions of people to stand up to the billionaire class and say, ‘You cannot have it all,'” Sanders said. “In America today, what we are seeing is the disappearance of the great middle class. People are working two, three jobs just to put food on the table. Meanwhile, almost all of the new income and wealth is going to the top 1 percent.”

However, the bickering over class issues was lost on the kids getting helicopter rides. An 8-year-old girl told Bloomberg reporter Steven Yaccino that if she got in the helicopter, she would ask Trump if he farts a lot.

8 yr old going up in Trump helicopter with @realDonaldTrump says she'll ask him if he farts a lot. pic.twitter.com/JjRfUVxKvK