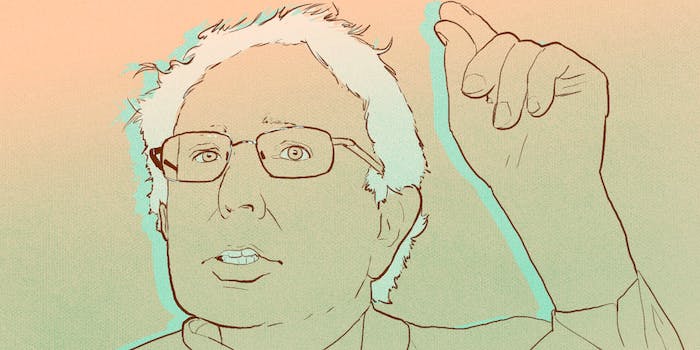 'Throughout history, you have had demagogues trying to divert attention away from the real issues.'

“I look forward to beating Donald Trump,” Sanders exclaimed. “I would enjoy that race very, very much.”

Sanders’s comments about Trump, who continues to dominate presidential campaign coverage thanks to his proposal to ban Muslims from entering the country, followed Fallon’s observation that both men were born in New York City.

“Throughout history, you have had demagogues trying to divert attention away from the real issues,” Sanders said of Trump. “This country today faces some enormous problems. We have a middle class that’s disappearing, we have almost all new wealth and income going to the top one percent, we have climate change, we have a corrupt campaign finance system.”

“What somebody like a Trump is trying to do is to divide us up,” he continued. “A few months ago we were supposed to hate Mexicans and he thinks they’re all criminals or rapists. Now we’re supposed to hate Muslims and that kind of crap is not going to work in the United States of America..”

Pundits have often called Sanders the Democratic version of Trump, with Sanders representing a populist revolt against the Democratic establishment and Trump doing something similar in the GOP.

But Sanders has been active in politics since he unsuccessfully mounted a third party run for governor of Vermont on anti-war platform in 1972. Trump, on the other hand, had never formally declared himself a candidate for public office until this year. He has spent the majority of his career turning his father’s real-estate empire into a lucrative TV career.

Sanders is trailing former Secretary of State Hillary Clinton significantly in most Democratic primary polls, but if he somehow toppled her and secured the nomination, he might have a good shot at beating Trump, too. In a McClatchy-Marist poll released last month, Sanders topped Trump by a 12-point margin, beating him 53 to 41. Other recent polls from Fox News and Public Policy Polling showed Trump with a lead in that match-up, although with a smaller gap than in the McClatchy survey.