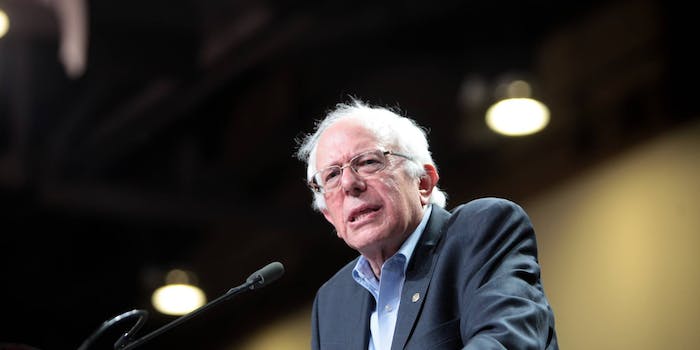 Bern down the deal.

Sen. Bernie Sanders may have lost his bid for the presidency, but that’s not stopping him from leveraging his newfound national notoriety to intervene in the machinations of America’s largest corporations.

In an open letter to government regulators, which was also published to Medium on Wednesday, Sanders called on federal officials to reject a proposed merger between telecom giant AT&T and entertainment behemoth Time Warner, which owns brands like Time magazine, CNN, and HBO.

“This proposed merger is just the latest effort to shrink our media landscape, stifle competition and diversity of content, and provide consumers with less while charging them more,” Sanders wrote in an open letter to Acting Assistant Attorney General Renata Hesse.

“Whether to approve this merger is a critical decision for the Department, but it is even more consequential for our democracy. Our democracy thrives when there is a diversity of viewpoints, and when citizens have unlimited access to information,” Sanders charged, asserting the merger represents a concentration of power in the media sphere that would harm the American public as a whole. “Analysts have called the proposed deal a ‘seismic shift’ for the media and technology sectors, with a giant telephone company ‘gaining control over hugely valuable brands spanning television, film, sports, news, video games and mobile and residential internet service.’” He continued:

“As we have seen, newly merged companies have used their scale and market power to raise prices on consumers and lower compensation for their competing producers. This deal would almost certainly lead to price hikes and reduced choice. We have seen the effects on consumers play out in AT&T’s 2015 acquisition of DirectTV. AT&T claimed that such a deal would benefit consumers. Less than a year later, these benefits are nowhere to be found, and AT&T raised prices for DirecTV services. We have also seen increased anti-competitive behavior resulting from the AT&T- DirecTV merger. For example, AT&T has exempted its DirecTV service from data caps to customers, in ways that are already arguably a violation of net neutrality principles.”

The proposed $86 billion deal would give AT&T ownership over not only HBO, the most successful cable subscription service in existence, but also channels like TBS and Cartoon Network, the online sports network Bleacher Report, DC Comics, the CW television network, the Warner Brothers and New Line Cinema movie studios, and a litany of other high-profile properties.

In order for the AT&T–Time Warner deal to go through, it needs to secure the Justice Department’s stamp of approval that the new firm won’t significantly harm competition.

The merger may also require agreement from the Federal Communications Commission; however, as the Washington Post notes, scrutiny from federal telecom regulators could be avoided if certain properties, like CNN, are spun-off into independent entities instead of being folded into AT&T’s growing empire.

Telecom companies gobbling up content factories has become a trend in recent years, kicked off with Comcast‘s purchase of NBC Universal in 2011. Cellular giant Verizon has moved to acquire both AOL and and Yahoo in multi-billion dollar deals. That consolidation, between the companies that own the pipes and the companies providing the content flowing through those pipes, followed a series of mergers within the telecom industry in the late 1990s, dubbed the “summer of love,” which significant whittled down the number of major cable and internet providers in the United States to a mere handful.

Broadband provider Time Warner Cable, which was spun off into a separate entity from its parent company, was sold to Charter Communications earlier this year. However, the previous year, the lack of regulatory approval from the DOJ and FCC scuttled a potential merger between Comcast and Time Warner Cable—showing what can happen when merger-hungry executives don’t do enough to appease government regulators.

Sanders’ letter noted that approval of this merger could trigger a new wave of consolidation throughout the media and telecom spheres. “At a time when our telecommunications and media industries are already too concentrated, we should be focused on opening those markets to more competition, not less,” he wrote.

That sentiment was shared by many industry insiders. The New York Times reports:

Sanders isn’t the only high-profile political figure to come out against the merger. Republican presidential candidate Donald Trump blasted the merger during a speech in Gettysburg, Pennsylvania, during a rant about the “dishonest mainstream media.”

“As an example of the power structure I’m fighting, AT&T is buying Time Warner and thus CNN, a deal we will not approve in my administration because it’s too much concentration of power in the hands of too few,” Trump said, promising, as president, he would also consider pushing to break up Comcast and NBC Universal.

On the Democratic side of the presidential race, the campaign of former Secretary of State Hillary Clinton was more guarded with her skepticism “I think it raises questions and concerns and they should be looked into,” she said.

During an event earlier this week, AT&T CEO Randall Stephenson pushed back against politicians critical of the deal, labeling their comments as “uninformed.”