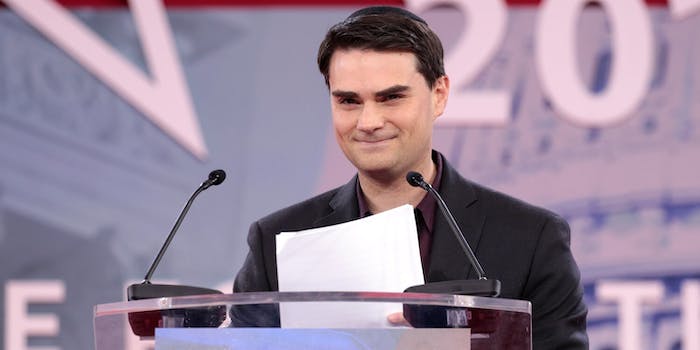 'My place of comfort has been removed from me.'

The right-wing political commentator bemoaned the politicization of sports on The Ben Shapiro Show Monday and suggested it was only a matter of time until professional sports split into two leagues: One political and one apolitical.

“My place of comfort has been removed from me, and it may not be restored until there are actual sports leagues that remove politics from the sports,” Shapiro said.

The Daily Wire editor-in-chief said there were “only a couple of times where I’ve really turned off the TV.” The first was the inclusion of Caitlyn Jenner on the cover of Sports Illustrated in 2016, 40 years after she won a gold medal at the 1976 Olympic Games. (This doesn’t sound like TV, but OK.) For Shapiro—who subscribed to the magazine for “10 to 12 years” and said he kept old issues in a box (swimsuit covers or regular?)—being forced to acknowledge the existence of trans people was the final straw.

“They decided, ‘You know what, it’s important for us to feature Caitlyn Jenner on the cover,’ when Bruce Jenner had not been an actual athlete for three decades,” Shapiro said. “And all of a sudden I’m reading about transgenderism in Sports Illustrated. I was like, ‘OK, I’m done, I can’t do this anymore, because this has nothing to do with sports.'”

Shapiro’s other grievance had to do with Colin Kaepernick’s protests, in which he took a knee during the National Anthem to protest police brutality in the United States. Kaepernick’s protests have returned to the public eye over the last two weeks as Americans have protested the death of George Floyd, who died after Minneapolis police officer Derek Chauvin knelt on his neck for nearly nine minutes. (New Orleans Saints quarterback Drew Brees found himself in hot water last week for insensitive protest comments.)

Shapiro, however, worries that players will go too far in their protests for basic human rights.

“It became incumbent on people to somehow approve of the ‘Hands Up, Don’t Shoot’ symbology that was being put out by particular players,” he said of Kaepernick’s protests. “And I’m tempted to do the same with [also boycott] the NBA now that you have LeBron James, who is willing to basically virtue signal on behalf of the Communist Chinese government but rip Drew Brees.”

Others were amused that Shapiro finally put his foot down on the politicization of sports in 2020, when Black athletes have been protesting racism for decades. Twitter user @emocanadian illustrated this point by tweeting photos of Muhammad Ali and former track stars Tommie Smith and John Carlos, who held up black-gloved fists during the 1968 Olympics in what was perceived as a Black Power salute.

Thoughts and prayers to Shapiro as he fights to reclaim his safe space.