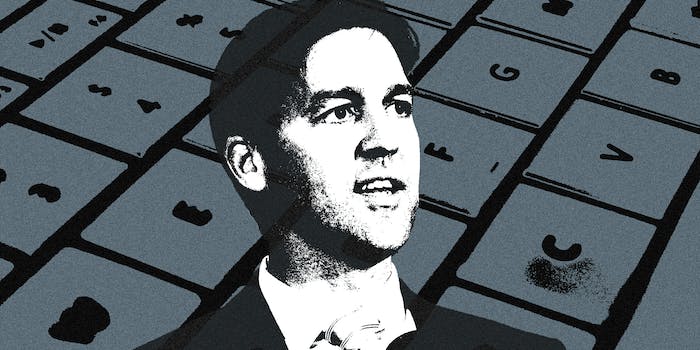 Ben Sasse is the king of do-nothing op-eds

He's done absolutely nothing but talk a big game.

Today, twelve Republican senators voted to terminate President Trump’s emergency declaration. Some pundits were surprised to see that Senator Ben Sasse (R-Neb) was not on the list. Those who follow Sasse’s actions as closely as his words, however, weren’t surprised.

Sasse—a history Ph.D. and the former dean of a small university turned politician—has been a leader of the “Never Trump” movement. He tries to sell himself as a paragon of American virtue, a right-wing antidote to Trump. He weighs in very publicly on issues he believes require a new way forward.

He believes in the promise of America.

And he does nothing about it. though he is usually unclear about what exactly that new way is.

Sasse has criticized Trump for “trying to weaponize distrust” of the media. and has called the President’s tweets “beneath the dignity of the office.” He has also voted with President Trump 85 percent of the time.

And in his arsenal to say one thing and do absolutely nothing about it, the Nebraska senator relies on one key weapon, which he wields in his never-ending quest to dupe the American public into thinking he is a man of import: the op-ed. Sasse’s words can be seen across media, from the Wall Street Journal to USA Today.

When writing opinion pieces, Sasse hammers home two points over and over again to convince the public he is saying something profound: declaring that partisanship is toxic to America, and that good old fashion gumption is the only way forward.

Conveniently for Sasse, these are two points that don’t have any policy solutions behind them. This allows him to write piece after piece selling himself as a conservative intellectual standard-bearer without doing much of anything at all. This approach allows a senator who has only been the primary sponsor of two bills that became law during his tenure in the Senate to seem like he has a far greater impact than he actually does.

Sasse’s most recent piece, co-written with The View co-host Meghan McCain in the Wall Street Journal is titled “America’s Extremist Abortion Industry.” Sasse’s analysis is that the problem with abortion is the far-left, who, Sasse wrongly asserts, favors infanticide.

But wouldn’t you know it, if we could all just come together with common sense solutions, all of this could be solved.

The piece tries stake out a “moderate” position on abortion, but nowhere does Sasse address the obvious criticism that there is actually no middle ground between abortion being legal or illegal. Instead, the article is filled with classic Sasse lines like, “There are many complicated debates to be had about abortion, and as unapologetic pro-lifers we want to have those conversations based on compassion and science.” and “[Banning late-term abortions] shouldn’t be controversial. It shouldn’t be partisan.”

Sasse says that he is trying to end that “partisan” aspects of the abortion. In reality, he has introduced a radical right-wing bill called the Born-Alive Abortion Survivors Protection Act. The bill enjoyed no bipartisan support, failed, and was viewed by critics as little more than a nod to far-right evangelical groups.

At least in this instance, he put in a kayfabe effort. Since Sasse joined the Senate in 2014, he’s introduced just 25 bills, with three being agreed to or enacted. By contrast, someone like Steve Daines (R-Mont.), who joined the Senate at the same time, and was part of the same party that was in power, introduced 105 and seen eight go through.

Sasse has no interest in actually doing anything, and never more was that clear during the Brett Kavanaugh escapade.

Sasse used his same frou-frouing without acting playbook in a piece sort of about the Kavanagh hearings. The problem with the Kavanagh hearings, Sasse argues, is not that someone with bad opinions or who has engaged in bad behavior has been nominated to the Court. No, it is that, “It’s predictable now that every Supreme Court confirmation hearing will be a politicalized circus.”

This focus on process rather than policy allowed him to appear high-minded while still ultimately voting to confirm Kavanaugh. In typical Sasse fashion, the senator still managed to deliver an IRL op-ed that lasted 18 minutes, in which he “occasionally cried” and stated that he “urged the president to nominate a woman.”

As Mitch McConnell said he would have brought Kavanaugh to a floor vote without a Judiciary Committee recommendation, Sasse could have voted no all he wanted.

Even though Sasse has consistently shown how ineffective he is, there is nothing that Ben Sasse thinks he can’t solve, even war. In a piece he wrote along with fellow Nebraska senator Joni Ernst, Sasse once again suggested putting partisanship aside and doing things the old fashioned way:

“Many Democrats want to blame President George W. Bush for the faulty intelligence that preceded the decision to go to war in Iraq in 2003. Many Republicans are rightly aghast by President Barack Obama’s premature withdrawal of troops from that same conflict nine years later, giving rise to ISIS. We need a broader, shared American understanding of how we got into our current foreign policy situation.”

An “American understanding” isn’t a solution.

It won’t surprise you to hear that Sasse has yet to propose any new “bipartisan ideas” on foreign policy, though he does think Americans “should wrestle with what—and where and when and how —U.S. leadership looks like in the world. But the necessity of U.S. leadership is inarguable — for our allies and for us.”

Sasse voted against the recent bipartisan effort to end support for Saudi Arabian hostilities in Yemen. He has also voted in lockstep with the Trump administration when it comes to expanding the forever wars and supporting Israel.

He can posture all he wants. Which he often does. Sasse even wrote an op-ed that just regurgitates the ideas he uses in all of his other op-eds, nonsensically titled, “Politics Can’t Solve All of Our Political Problems,” where he summed up sums up the absurdity of his positions perfectly, claiming that the solution to politics is not actually politics.

“The problem is that our ever more ferocious political tribalism and mutual hatred don’t originate in politics, so politics isn’t going to heal them.”

He adds, “Americans have always had political disagreements with their neighbors, but in the past, political differences could disappear when Friday night ballgames rolled around and the whole town turned out wearing the same colors and cheering for the same team. Today our towns are hollower, and we’re not on the same team anymore.”

This sentence may be the perfect mix of Sasse’s fetish for post-partisanship and his obsession with rustic nostalgia.

Sasse leans so hard on his two favorite big, empty ideas, that partisanship is bad and the old-fashioned way is good, that he wrote an entire book about each. In Them: Why We Hate Each Other – and How to Heal, he argues that party politics is unnecessarily divisive and that most Americans want the same things. In The Vanishing American Adult Sasse wistfully laments that America just isn’t what it used to be and only a dose of tough talk and hard work can cure what ails us.

Absent everywhere is tangible fixes outside of imagining an idyllic America that never actually existed.

While it is probably a blessing that he has very little in terms of legislative accomplishments to back up his big talk, it makes his words, and his belief in himself as America’s next great truthteller, that much more hollow.