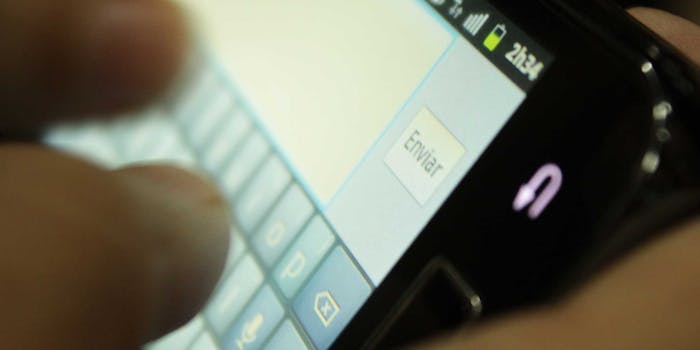 How I mastered the art of ninja-speed texting

I had to master QWERTY, tame my thumbs, and battle the real estate broker that is my tiny phone screen.

Nothing can stop the smartphone. Seriously, who chats on their laptop anymore? I don’t know where the idea came from, but something about constantly texted made me realized I wanted to become the master. And to do that, I decided to become a keyboard ninja a few months ago.

What is a keyboard ninja? One who is blazingly fast with letters, never misses their strike, and doesn’t kill the innocent… by that, I mean the English language. (if u typ lyk dis, u r nt a ninja!)

Like everyone else, I started out as a newbie ninja with the standard equipment. This: This is really… UGLY. The functionality is just standard… maybe the swiping gestures are the only extra.

This has to be downright the ugliest Android keyboard available. I mean, seriously! Have you seen any self-respecting ninja with dumb-looking shuriken? No! I couldn’t be caught dead using this keyboard.

I must say I felt Google heavily improved the aesthetics for its new Lollipop keyboard. I actually used this for a week or two after I got it. The material design keyboard is a big improvement with its flat layout.

But I realized I wasn’t satisfied. I need something better. I had to master QWERTY, tame my thumbs, and battle the real estate broker that is my tiny phone screen—and the Google keyboard just couldn’t cut it.

So I started searching for fresh new tools. Many people recommended SwiftKey. I actually liked it at first; it looked way better and adding words to the dictionary was easier, too. Some themes of SwiftKey had a nice flat layout and the font also looked good.

The only problem I had with SwiftKey was… it wasn’t swift! I hate swiping.Dragging your thumb across the screen for just one word?

Once I realized I was too fast for SwiftKey, I just had to move on. Luckily, a simple Google search brought me to the big momma of them all: Fleksy. I was already excited about just getting a new keyboard. But one glance was all it took to make me decide it was the one.

It was gorgeously flat with the right gaps everywhere. Its designers did an impressive job on the aesthetics. After the mini-tutorial, it took me just a few minutes to understand how thoughtfully well the gestures were programmed. Fleksy’s functionality was remarkable with intuitive swiping gestures for toggling, deleting and learning words. The vibration and sounds while typing gave a nice seductive feel. All in the all, designers pulled through awesome work on the UI and UX.I thought Fleksy was it — my true love, er, keyboard.

But, as with most good things, you start to take them for granted. I got bored of Fleksy. It just didn’t give me the same excitement I got at the beginning. I needed a change—so, I went back to tool-hunting.

And then I found something that left me awestruck: Minuum. Look at that innovation!

Look at it! Yes, that’s the entire keyboard!

I just had to use it. It was so exciting to type in this keyboard. It was slim, sexy, highly functional and saved a lot of space on my tiny smartphone. And auto-correct was actually good! Probably the best keyboard for smartwatches.

But alas, this relationship wasn’t to last. Minuum had a certain vibe about it, but in the end, Fleksy was just smoother to use; there were fewer prediction hassles. Minuum just had too many hiccups on my small screen to regularly tolerate. For awhile, I toggled between them both.

Luckily, Fleksy welcomed me back with open arms. Which is to say I kept using the free trial over and over by uninstalling and reinstalling the app (Shhh!).

But, after realizing again how productive Fleksy is, I’ve decided to commit. I’m… buying the… full version (*wipes tears from eye*).

So after nearly half a year since I started as a n00b who looked at his keyboard while typing, I believe I have attained ninja nirvana with Fleksy. I can shoot out sentences with ease and I’m becoming better and better at conversations over chat. I kind of overuse this power: My chats are usually a paragraph on my side and a sentence from the recipient in between.

And btw, I use very limited abbreviations.

But, I realized I forgot the most important part of being a ninja: stealth. Now you don’t see me. Now you still don’t.

Confused? Don’t see anything? You’re not supposed to.

I can now type perfectly accurately and quickly using Fleksy’s invisible keyboard. Plus, it saves the pain of deciding which theme to choose and the transparency means I see a lot more screen. The only thing I would ask of Fleksy is to make swiping available so you can text with one hand if you want.

But the big takeaway for keyboard obsessives is this: A perfect keyboard must look good, have a responsible auto-correct, make interpreting words easy, and not hog up valuable screen space.

Because only with the right tools can you become a keyboard ninja.