There are a lot of apps that claim to turn back the wizened hand of Father Time by making you look younger in photos. There’s Skinnee Pix, the app that takes your selfies and purports to shave five to fifteen pounds off your face. There’s Visage Lab, which claims to make your sun-spots and wrinkles disappear. But for most of these apps, the finished product makes it clear that you’ve gone in and done some extensive retouching, making you look less like a younger and more spry version of yourself and more like a Redbook Photoshop fail.

A new app, however, is claiming to be able to not just touch up your photos, but enhance your image in real time. Beauty Mirror, which launched today for iOS, uses live 3D face tracking to to modify your own image in real time with customizable options like eyebrow shaping, jaw contouring, and brow lift. Basically, it’s sort of like a virtual plastic surgeon for photo or video selfies, except it doesn’t say horrible things about your face and body and make you give them $10,000 for their beach house in Puerto Vallarta.

Created by the folks at ModiFace, the team behind Sephora’s 3D AR mirror app, Beauty Mirror claims to feature “the world’s most advanced virtual makeover technology” to transform your face. But unlike other apps, which merely let you try on a series of cosmetic products, Beauty Mirror lets you apply skin, facial and anti-aging effects to ostensibly make you look younger.

Given the proliferation of similar apps on the market, I was skeptical that Beauty Mirror’s real-time facial modification features would actually work. But then I ran out of energy on the Kim Kardashian game during a crucial charity photo shoot with Marcel Tesiano, so I decided to give it a whirl. 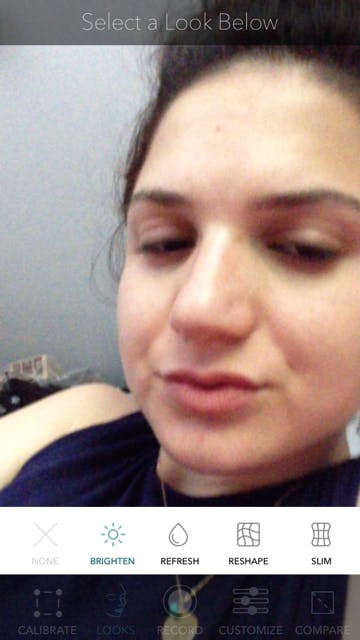 (This is me, #nomakeup [brave!], being cynical about Beauty Mirror).

After I installed the app, I chose from four “looks”—brighten, refresh, reshape, and slim—to see their effects in real time. You then apply the “looks” to 14 different filters, which basically alter individual features—so, for instance, you can “slim” or “reshape” your nose. (As someone who in her early teens dreamed of getting rhinoplasty the way most kids dreamed of getting their driver’s license, this was obviously very exciting to me). The app updates face location and pose every .03 seconds to keep track of all the effects you’re applying as you look in the mirror.

I decided to apply all the different “looks” and filters at once and see what happened. This was the result: 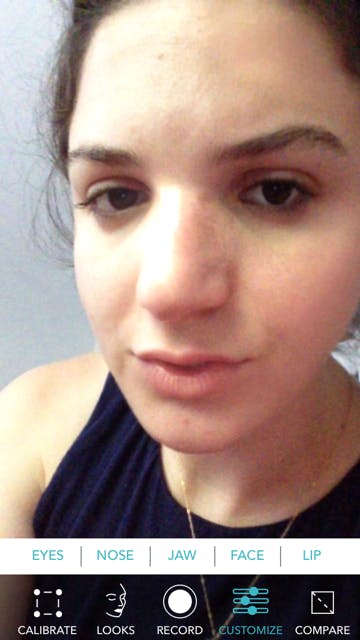 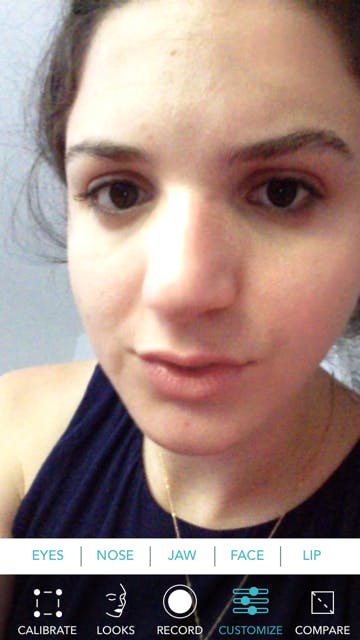 As you can see, my eyes were bigger, my lips were fuller, my jaw was contoured, and my nose shaved down somewhat; for the first time in my adult life, it also looked like I had cheekbones. I looked a little bit like an anime character, sure, but the changes were far more subtle than I had anticipated.

The next day I tried it again with the “record” function, to see if the app was able to keep the effects in place in real time. On this metric, it was far less successful, as the blurry, constantly shifting facial effects made me look like an Animorphs character mid-morph:

Obviously, Beauty Mirror’s facial recognition algorithm needs a fair amount of tweaking before it can actually say it offers “the world’s most advanced virtual makeover technology.” But the question is, why do we actually need an app like Beauty Mirror, or Skinnee Pix, or any of the other hundreds of photo-editing apps on the market, in the first place?

In the case of Beauty Mirror, the answer, it seems, is that it’s a form of sophisticated product placement: The press release for the app says that in the coming months, the technology will be featured in in-store simulations for various anti-ageing and beauty products. But unless you’re actually willing or able to shell out thousands of dollars for these products and plastic surgery, it seems pretty unnecessary, not to mention extraordinarily superficial.

Unsatisfied with Beauty Mirror, and satisfied with my non-refreshed, non-reshaped schnozz IRL, I went back to playing “Kim Kardashian: Hollywood,” where I’d earned approximately nine energy points in the meantime. At least that game was a lot less shallow.