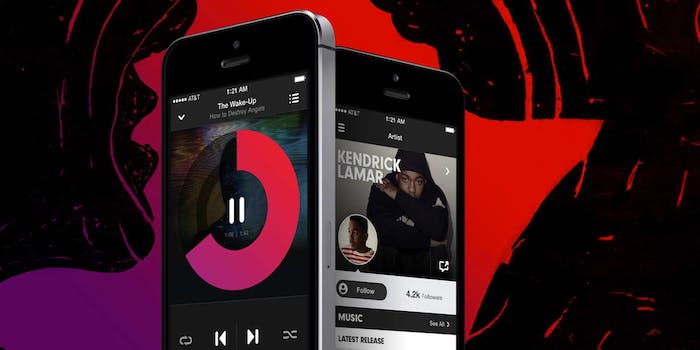 Beats: The latest music-streaming service you might use twice

Should we forget about Dre or embrace his foray into streaming?

We are living in the Age of Streaming. Spotify, Pandora, SoundCloud, Rdio, iTunes Radio, 8tracks, Songza, Last.fm, Grooveshark, Rhapsody, and many, many more services offer listeners opportunities to stream music. We’re spoiled. When I was 12, sitting on the carpet in my room with my finger over the “Play” button, waiting to record FM radio hits, would not be able to fathom the instantly accessible smorgasbord of streaming choices we have in 2014.

And now there’s one more service throwing its hat into the streaming ring: Beats Music, which debuts today. The subscription service most closely resembles Spotify in its music collection, though the way it curates playlists is closer to Songza’s offerings. You can use it as an iOS, Android, or Windows app, and there’s a desktop version, plus integration with newer LG smart TVs. A 20 million–song catalog is available on demand, and you can follow fellow users and listen to music offline (provided you have a strong signal).

These choices spur the service to show you custom recommendations, which are updated a few times a day. Beats doesn’t rely on algorithms like Pandora, instead pushing users towards playlists curated by musicians. Now, curated playlists aren’t a bad idea; as I mentioned before, Songza in particular has a strong roster of playlists. And Beats has former Pitchfork and XXL writers to make custom playlists, so you get tracks selected by people who know what’s up. Then again, Songza does the same thing, and it’s free.

The most unusual discovery tool: Beats has a feature called “Sentences” which cobbles together playlists for users based on a weird kind of Mad Libs setup, where users fill in the blanks about how they feel and where they are. It’s fun to play around with, but the results aren’t much different than using Songza’s tool that picks music based on what time of day and day of the week it is, and what activity you are doing.

So even the most distinctive-appearing tool isn’t actually something groundbreaking.

Beats started as an audio hardware company, and its eponymous headphones are a success story—they’ve become a bona fide status symbol. Having a savvy celebrity cofounder in Dr. Dre helped propel the brand to its current perch, and the headphones and audio equipment continue to make brisk sales.

It may be harder for Beats to distinguish itself in the streaming field, though. Beats has strong brand recognition, and that’s a huge advantage, but part of the appeal of Beats by Dre headphones is the look they give users, and that’s not a factor here. It’s easy to see when someone’s wearing the thick headphones, but much harder to tell whether they’re also listening to the Beats Music service or something else entirely.

Another even more pressing obstacle: Beats Music is arriving late on the scene. And that might make you cool at industry parties, but as an app, it really needs to have something special to draw customers away from the services that got there first, and I’m not confident it’s good enough to elbow its way into an already-crowded market. I don’t see a clear benefit to using this instead of Spotify and Songza, my two go-to streaming services. I prefer to use free ad-supported versions of things. Beats doesn’t give you that option. Once your free trial is over, it’s $9.99 a month or nothin’.

Of course, Beats has proven itself to be scary-adept at branding, so I wouldn’t be surprised if the company implements a successful strategy to turn its rather ordinary competing service into something that at least is hyped as superior, even if that’s really not the case.