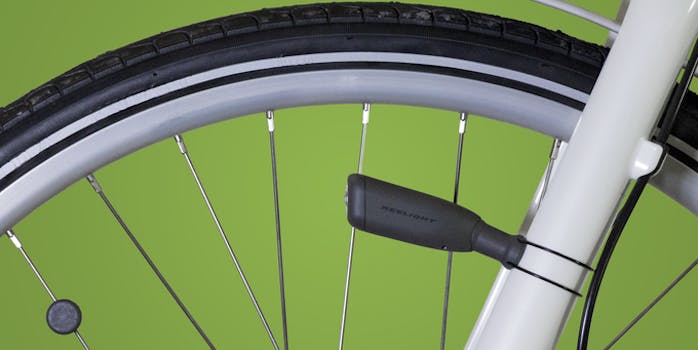 This magnet-powered bike light may be genius

Thanks to the mysterious power of magnets, this light needs no batteries.

Battery-powered bike lights are a pain. If you’re regularly commuting in the wee hours of the day or night, it feels so wasteful to go through batteries that often. The alternative is a rechargeable light, and it’s got its own negatives. If a bike light is a staple on your whip, having to take it off and charge it each night can also be tiresome.

The Danish company Reelight has a clever solution, though: a bike light that uses magnets as power. The CIO Battery Free Bike Light is the company’s latest model, and it’s currently raising funds on Kickstarter. The light itself attaches to either the front fork or rear seat stay using a locking cable mechanism. Then, you attach a magnet to one of your spokes (as you would for a cadence sensor). Each time your wheel turns, the LED flashes brightly—without needing a battery. And when you stop pedaling, the light continues to blink for up to two minutes.

Once mounted, the light flashes day or night. (Good news, since daytime running lights have been shown to help reduce accidents by making bike riders more visible to drivers and pedestrians.) The light itself should be visible up to 300 meters—slightly under three football fields—away.

Reelight expects the CIO Battery Free Bike Light to ship in October. With more than 550 backers, it’s already most of the way to its target goal. You can currently pre-order a set (which includes both a front and rear light) for $40, which is 38 percent off the retail price. As long as the exchange rate to Danish Krones stays steady, that’s actually a really good deal on a bike light.