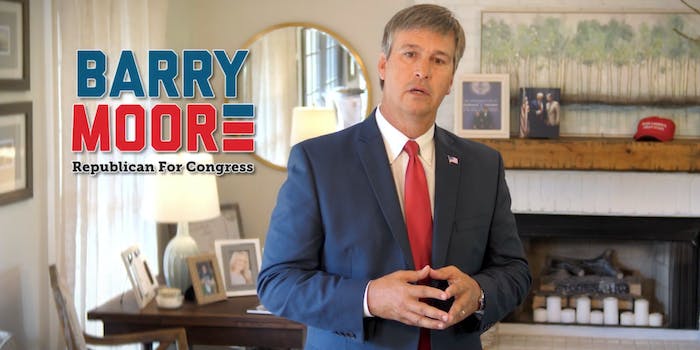 Barry Moore's post was seemingly removed after users reported it for 'promoting violence.'

Republican congressional candidate Barry Moore is facing criticism online over a meme he supposedly posted in support of Kyle Rittenhouse, a 17-year-old who is facing murder charges after allegedly shooting three protesters in Kenosha, Wisconsin.

Moore is running for Alabama’s second congressional district. The meme he allegedly posted showed photos of two men who were injured during riots following George Floyd’s death. One man was beaten after attacking protesters with a machete. The other was reportedly attacked after he crashed his truck during a protest.

The images of the two men who were beaten were captioned: “didn’t fight back.” The third image was of Rittenhouse, alive and carrying a gun, and was captioned: “fought back.”

Rittenhouse, of Antioch, Illinois, allegedly shot three protesters in Kenosha, killing two and severely injuring one. Rittenhouse was arrested Wednesday and has been charged with homicide in the first degree, reckless homicide, attempted intentional homicide, two counts of recklessly endangering safety, and possession of a dangerous weapon as a minor, according to CNN.

Rittenhouse has been praised by Republicans and gun-enthusiasts for exercising his second amendment right. Fox News host Tucker Carlson defended Rittenhouse’s actions during a segment, and right-wing media pundit Ann Coulter said she wanted Rittenhouse as “her president.”

Moore is being called “callous” and “depraved,” and the Republican Party is being accused of promoting white supremacy.

Some defended Rittenhouse’s actions, alleging he only was acting in self-defense.

Video from the protests in Kenosha shows Rittenhouse allegedly fatally shot a protester, and said, possibly on the phone, “I just killed somebody.” Rittenhouse was then chased by protesters, and he allegedly shot two more people.

The Daily Dot has reached out to Barry Moore’s campaign.