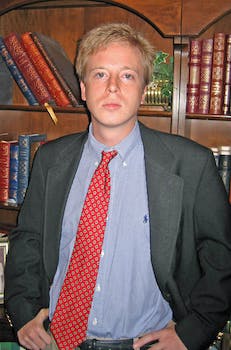 Barrett Brown goes to war with the drug cartels

A Texas writer and sometimes spokesman for Anonymous names a North Carolina district attorney as a crime figure.

As Anonymous called off plans to name government officials with links to the Mexican drug cartel Los Zetas, a Texas writer named Barrett Brown reemerged as an unofficial and controversial spokesman for the hacker group, and stirred up fresh trouble.

Brown announced on Twitter Friday that he was continuing the investigation, and brought the Mexico-born movement to U.S. soil by apparently naming a North Carolina district attorney as a cartel accomplice.

“Those in Asheville, NC should watch movements of District Attorney Ron Moore at this time. #OpCartel,” Brown tweeted on Saturday afternoon.

Moore did not return telephone messages left at his law office on Saturday afternoon and Sunday morning.

Brown posted a recording of an interview with Gawker writer Adrian Chen Saturday in which he discussed his plans to move forward, as well as a book deal with Amazon.com, the online retailer, to co-author an insider’s account of Anonymous. (The posting may have been a move by Brown to preempt Chen’s own account of Brown’s actions, which pointed out some concerns about Brown’s past.)

Brown had previously hinted that he would be tying an American district attorney to the Mexican drug cartels. When asked via Twitter to elaborate further on why he tweeted Moore’s name, Brown offered a curt reply.

“@bloodandvolume This will proceed in accordance with a pre-set plan to which you ought to relax yourself,” Brown tweeted in response.

Moore has been the subject of similar rumors in the past. In 2008, participants in a thread on Topix, a hyperlocal news site, made allegations that Moore ran the black market for narcotics in Asheville.

None of those rumors have been substantiated. Nor do they seem to have generated much local concern: A 2008 petition that was started in response to the allegations and called for Moore’s removal from office garnered just 97 signatures.