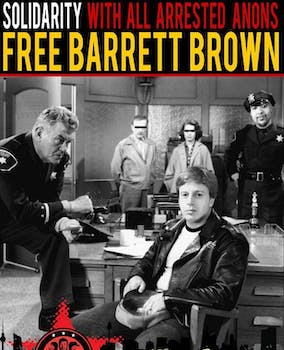 Barrett Brown's girlfriend has taken to YouTube to explain that her boyfriend's arrest, caught on tape via TinyChat, was not a hoax.

When the FBI raided controversial Anonymous member Barrett Brown’s apartment last week, they weren’t planning on being taped; audio of the raid went out live to participants in a TinyChat Barrett and his girlfriend had going. Now Brown’s girlfriend, @Elvira_ebooks, Evie Paradise, has taken to YouTube to respond to charges the entire thing was a fraud.

These charges emerged in part as a response to her actions. As the struggle entered the living room, she shut the lid of the laptop, killing the video while the mic continued to record. In essence, all the action happened off-stage.

The lack of video evidence led some people to believe that Brown was collaborating with the FBI and had pre-arranged a staged and conveniently non-visual arrest. The chat transcript reveals that some of the chat participants questioned the legitimacy of the apparent showdown within seconds.

A different, rather shaken, chat participant uploaded a video to Ustream, where he gave his opinion that the raid was genuine; he said that one thing which helped to convince him was that if you were to set up a fraudulent takedown, you’d be soberer and calmer than the agitated Brown was. Point taken.

Others, of course, were not convinced.

“Cool how the FBI staged @BarrettBrownLOL‘s arrest live on cam to bolster the idea he hasn’t been working for them for some time already,” tweeted @Methadonna.

Apparently fed up with the accusations and frustrated at a lack of support from Facebook friends (a friend helps you move; a true friend helps you move a body; a Facebook friend likes your “We moved” status update), Brown’s girlfriend has uploaded her own video. It is complete with whiteboard diagrams of the layout of the apartment, a pretty decent Barrett Brown impression, and a heavy dose of frustration.

Beginning with a passable Barrett Brown impression with cigarette dangling, she carefully demonstrates that it was impossible for her to have seen what was going on by the door from her position at the computer. She wants to know who’s spreading these rumors, who’s setting her up.

“Is it you, Chen?” she asks, referring to Gawker’s Adrian Chen, not a Brown fan.

“Is it you, McCain?” Robert Stacy McCain is a conservative journalist and blogger who’s even less fond of Brown than Chen is.

Whoever it was, they’ll presumably have to testify. Brown is currently in federal custody at the Mansfield Federal Detention Center in Mansfield, Texas, being held without charge and without bail. A hearing is scheduled for Sept. 24, and predictably Free Barrett Brown sites have already sprung up, both for and for the lulz.