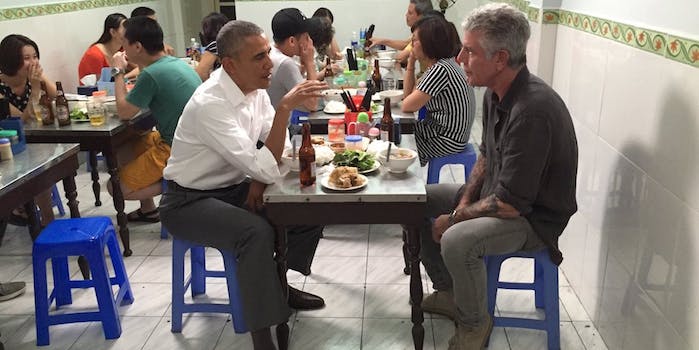 Why are all their fellow diners acting so casual?

President Barack Obama on Monday made major foreign-policy news by announcing the end of a decades-long arms embargo on Vietnam. But it was the next thing Obama did on his trip that has Americans talking.

The commander-in-chief ate some noodles with another famous person.

The President's chopstick skills are on point . #buncha #hanoi

On Twitter, Bourdain said that the meal, which consisted of a pork-and-noodle dish called bún chả, cost just $6, which he paid.

He also revealed the the two tall Americans—Obama is 6 foot 1 inch, while Bourdain towers at 6 foot 4 inches—enjoyed the food while sitting on some relatively short plastic stools. (The average height of a Vietnamese man is about 5 foot 5 inches tall, according to one study.)

The casualness of the other diners in the photo has struck some people as particularly odd. But to find out whether their arrival caused a stir, we’ll have to wait until the Parts Unknown episode about Obama’s trip airs sometime later this year.

Obama’s appearance on Parts Unknown marks the White House’s latest effort to reach new audiences through popular culture. Following his final State of the Union address in January, Obama sat down for interviews with several YouTube stars, and he also appeared on an episode of Running Wild with Bear Grylls last year during the first trip by a sitting president above the arctic circle in Alaska. Last summer, the president appeared on Marc Maron’s popular WTF podcast for a candid interview.

Obama’s trip to Vietnam, his first as president, began on Sunday. Later this week, he will travel to Hiroshima, Japan, where in 1945 the U.S. military dropped a nuclear bomb in an effort to force Japan to surrender in World War II. Obama, who will be the first sitting president to visit the site, will not apologize on behalf of the U.S. for dropping the bomb.