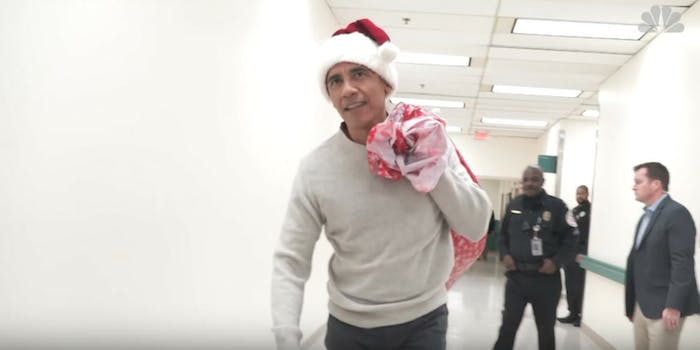 Obama can be seen passing out gifts and playing with excited children as he moves from ward to ward before delivering an address to hospital staff.

Former President Barack Obama surprised and delighted patients and the whole internet on Thursday by dressing up as Santa and delivering presents to a children’s hospital.

Footage of the visit was posted on the official Twitter account of Children’s National, a medical center in Washington D.C.

Thank you @BarackObama for making our patients’ day so much brighter. Your surprise warmed our hallways and put smiles on everyone’s faces! Our patients loved your company…and your gifts! https://t.co/bswxSrA4sQ ❤️ #HolidaysAtChildrens #ObamaAndKids pic.twitter.com/qii53UbSRS

Obama can be seen passing out gifts and playing with excited children as he moves from ward to ward before delivering a speech to hospital staff, thanking them for their hard work.

“I just want to say thank you to all of you guys for the chance to talk to some of the wonderful kids and their families at a time that is obviously tough for folks,” Obama said.

“As a dad of two girls I can only imagine, in that situation, to have nurses and staff and doctors and people who are caring for them,” he continued, “looking after them and listening to them and just there for them and holding their hand… that’s the most important thing there is.”

Merry Christmas and happy holidays to the extraordinary kids, families, and staff at Children’s National. And thanks for humoring me as your stand-in Santa. https://t.co/mFmYCVk7cr

The holiday gesture warmed the hearts of many online.

There are several images of Obama playing Santa at the National Children's Hospital. This may be the best…#ThursdayMotivation #MerryChristmas pic.twitter.com/jhKyo6a6Gq

One of the best qualities about you, Mr. President, is your obvious love of children. Happy holidays to you and your family, and thank you for giving me joy this morning.

From Barack playing Santa to Michelle’s boots…I’m so grateful for this Obama fueled joy in my feed. Happy holidays!