People have accused the president of being many things. But a bro?

The former University of Chicago law professor, who’s confessed to having a taste for arugula, just doesn’t seem like the bro type. Yet a mixup on Pinterest has people thinking Barack Obama is one of those obnoxious men who like to be all manly in their use of the image board.

After the Daily Dot broke the news that President Obama has what appears to be a real Pinterest profile, some readers noticed he appeared to have a new board labeled  #BroPin: 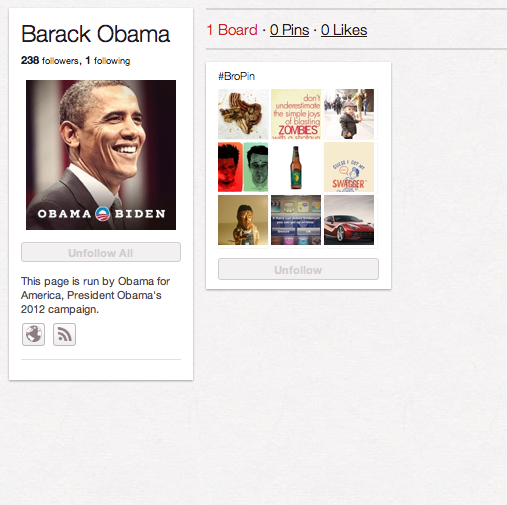 But that wasn’t actually Obama’s pinboard. Instead, it was an accident caused by a poorly designed Pinterest feature.

When we wrote about Pinterest users hijacking popular brands in order to gain more publicity for their boards, we focused on users who intentionally add high-profile Pinterest accounts—like, say, Starbucks—to their boards for publicity.

However, since Pinterest makes it easy to add users to boards without their permission, some of this hijacking happens unintentionally, too.

#BroPin is a board moderated by social media strategist Mike Street, whom the Daily Dot recently profiled. Street confirmed to us that he had invited the President to contribute to his board, but had no idea it would show up on the President’s profile.

The resulting confusion led to at least one blogger declaring the president’s board a fake.

However, just like with Starbucks earlier, any user can add a popular brand or celebrity to one of their boards, no permission required. If brands or celebrities aren’t actively monitoring Pinterest, they may appear to endorse boards they never agreed to join.

“I wasn’t aware that my #BroPin board would appear on Obama’s page,” Street told us. “I have removed this board but would still love Obama to collaborate, ‘cause he is the ultimate bro!”

Street said he’d assumed that users needed to confirm whether they wanted to join before the board appeared, and hopes Pinterest adds that feature in the future.

The problem of collaborative board permissions appears to be one that Pinterest’s top users are already aware of—and they’re trying to raise awareness about the issue through their profiles.

“I politely request not to be added to any Group Boards without my consent,” writes Joy Cho on her Pinterest profile. She is currently the eleventh most followed user on Pinterest.

So far, there has been no response from Pinterest on the issue. Let’s add it to the long list of controversies they’ve chosen to keep mum about.