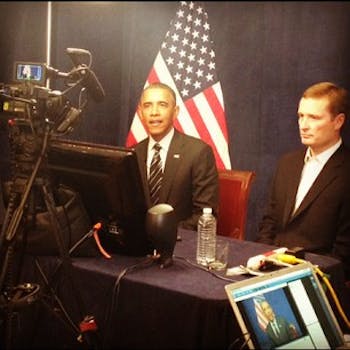 While Republicans were duking it out in the Hawkeye State Tuesday to decide who would take on the President in November, Barack Obama’s campaign staff were busy updating Obama’s Facebook, Twitter and YouTube pages. Obama also joined iPhone-based photo sharing service Instagram, the first campaign to do so.

By Tuesday night, the campaign had posted two images of Obama talking to Democratic caucus goers in Iowa via-video conference. Both images had gained hundreds of likes and comments within hours of being posted. And the account, itself, had amassed nearly 8,000 followers.

The photo sharing service has been gaining popularity as a medium for covering politics, satated a  blog post by Instagram. It noted that many journalists and media outlets have been using it to give behind the scene views of the campaign.

Of course, Instagram welcomed the big name with open arms: “We’re excited to welcome President Barack Obama to Instagram! We look forward to seeing how President Obama uses Instagram to give folks a visual sense of what happens in the everyday life of the President of the United States,” wrote CEO Kevin Systrom.”