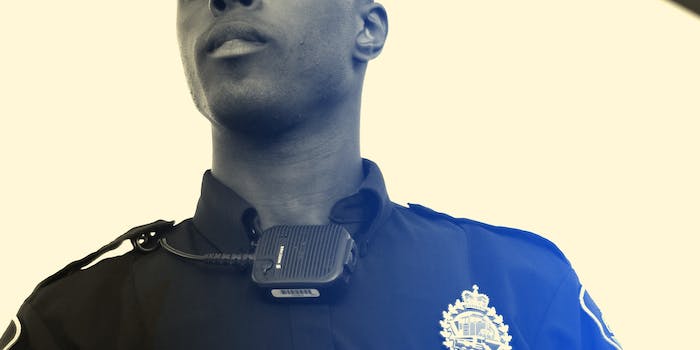 Facing criticism for a controversial veto, National Guard troops in the streets, and protesters clashing with police, the Baltimore Mayor’s Office says it is actively searching for vendors to supply police body cameras to fulfill a multimillion dollar program that’s been in the works since last year.

Mayor Stephanie Rawlings-Blake’s plan would cost from $5 million to $7.9 million over the first year depending on the types of cameras and which police officers wore them, Deputy Press Secretary Cheryl Stewart told the Daily Dot.

“There are so many misconceptions; people are so misinformed. This will give clarity.”

The Baltimore City Council passed a bill mandating their use late last year, but Rawlings-Blake vetoed the bill, an act gaining nationwide attention in the wake of the death of Freddie Gray, a 25-year-old black man who died from a spinal cord injury while in police custody.

As protests continue on the streets of Baltimore, the 2014 veto has incensed online activists searching for answers on police misconduct.

Rawlings-Blake vetoed the bill for several reasons, primarily because the bill lacked key details required to make it work in the field.

The bill itself is one paragraph long: “FOR the purpose of requiring all polices officers employed by the Baltimore City Police Department to be personally equipped with digital audio-and-video recording devices; and allowing a phased implementation of this requirement during the 1st year following the effective date of this Ordinance.”

For the Mayor’s Office, that wasn’t enough.

“Does it say who wears it?” Stewart asked. “When they wear it? How much it costs? Does an officer on desk duty wear a camera, in a store room? When does he turn it off? The mayor was looking for something comprehensive to give parameters and guidelines and stipulations.”

The lack of detail, from the mayor’s perspective, meant it should not become law, and left more questions than answers.

“Anyone can say if he goes to the bathroom, he has to have the camera on,” Stewart said. “How long do videos have to be stored? What’s the cost? Are you just going to roll it out or is there going to be a trial period where a certain number of officers wear it?”

Stewart said she had been dealing with the issue on a regular basis in recent days.

“That’s what people say: You vetoed it, and we wouldn’t have this problem if you didn’t veto it,” she said. “There are so many misconceptions; people are so misinformed. This will give clarity.”

Rawlings-Blake’s own police camera plan, which was put together in concert with a representative from the American Civil Liberties Union (ACLU) and the Baltimore Police Department, was announced in February, two months before Gray died.

The mayor’s plan begins with a pilot program testing out different camera types and how many officers will wear them. Cameras would be turned on for every interaction with the public and would have a “buffer period” so that footage from at least one minute before activation is recorded and saved. Citizens can ask police to turn the camera off.

Footage would be stored for four years and then destroyed unless some relevant legal action is being taken, in which case footage can survive on.

The push toward police cameras in Baltimore echoes the vast nationwide push that gained momentum last year after the deaths of Garner in New York City and Brown in Ferguson, Mo.

Echoing studies throughout the U.S., a year-long Police Foundation study found that police departments use of cameras is “associated with dramatic reductions in use-of-force and complaints against officers.”

Incidents of police force against civilians fell by 60 percent and complaints against cops fell 88 percent when police began wearing cameras in Rialto, Calif., a city 50 miles east of Los Angeles.

“Citizens should know officers are being held accountable,” Denver Police Chief Robert White said last year. “The only officers who would have a problem with body cameras are bad officers.”

Photo via kris krüg/Flickr (CC BY 2.0) | Remix by Max Fleishman