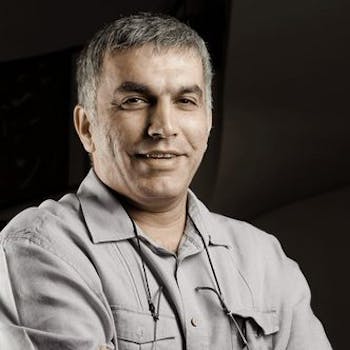 Bahrain overturns activist’s conviction for tweet, but pursues other charges

A Bahraini civil rights activist jailed for his tweets against the government has had part of his conviction overturned.

Nabeel Rajab was jailed on July 9 on three separate charges claiming he incited violence against the government, criticized Bahrain’s prime minister on Twitter, and participated “in illegal rallies and gatherings,” Rajab’s lawyer told the New York Times. He was given a year-long sentence for each of the three charges.

Rajab remains behind bars despite having a Bahrain judge overturn part of his convictions Thursday stemming from the tweets.

“It’s hard to celebrate when the Bahrain authorities admit their mistake in jailing Nabeel Rajab for the tweet but keep him in prison until 2015 on other spurious charges,” Brian Dooley, director of the Human Rights Defenders Program of the U.S.-based advocacy group Human Rights First, told the Associated Press. “They’ve found another way to silence him, and that’s what matters.”

Rajab has more than 170,000 followers on Twitter. Since February, Rajab has been in and out of police custody because of his protests and tweets against the government.

Bahrain is one of the countries affected by the Arab Spring revolutionary uprisings that began in December 2010. To date, more than than 80 Bahraini people have died and about 3,000 have been arrested in protests against the government.

Rajab’s wife, Sumaiya, is organizing a campaign to free her husband before a Sept. 10 appeal hearing.