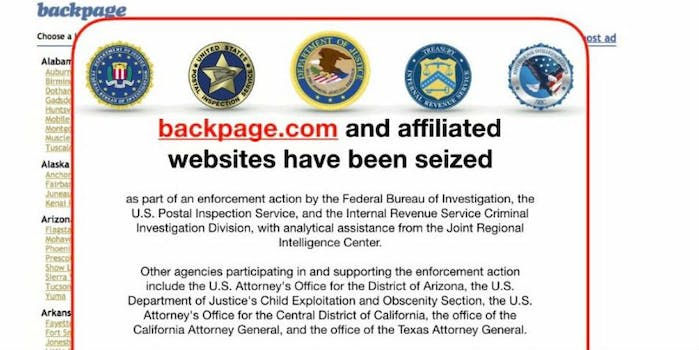 Sex workers are furious and concerned.

Controversial classified website Backpage appears to have been seized and taken offline by the federal government. Multiple users posted a notice on Twitter with the headline “backpage.com and affiliate sites have been seized.”

As of Friday afternoon, only the site’s main page and location selector were accessible. Specific category pages all loaded an error message. Interestingly, the takedown notice only appeared on backpage.ca, its Canadian site.

Backpage is a classifieds site that offers a range of services like Craiglist but is best known as a hub for sex workers. Those who placed ads on the site expressed their anger and concern on social media. Some are worried they won’t get refunded. Others worry about their income and safety; if they can’t find work on the internet, that means looking for work on the streets.

Backpage has just been seized by the federal government and taken down. This is terrifying. pic.twitter.com/8JNO2Dy831

Backpage executives have for years denied claims from law enforcement agencies that they actively facilitate sex work and “sex trafficking.” A 2016 Senate report called the site the “largest commercial sex services advertising platform in the United States” and said its officials “have publicly acknowledged that criminals use the website for sex trafficking, including trafficking of minors.”

Earlier this year, government pressure forced Backpage to shut down adult ads. It released a statement stating it will censor adult content as a “direct result of unconstitutional government censorship,” NRP reports.

Backpage CEO Carl Ferrer was arrested in 2016 on allegations that the site made money from sex trafficking ads for adults and children. A California search warrant of the company’s records supposedly showed it made 99 percent of its $51 million income over 29-months from adult-services ads alone.

We have reached out to the Department of Justice for more information. The agency is expected to release more details later today per its takedown notice.

Update 3:28pm, April 13: The Justice Department published a statement confirming the seizure of Backpage.com and revealing the site’s co-founder and CEO Carl Ferrer pleaded guilty to “conspiracy to facilitate prostitution using a facility in interstate or foreign commerce and to engage in money laundering.”

Ferrer’s plea deal requires him to take all steps necessary to shut down Backpage and forfeit all corporate assets and property “owned or controlled by various Backpage-related entities.”

“For far too long, Backpage.com existed as the dominant marketplace for illicit commercial sex, a place where sex traffickers frequently advertised children and adults alike,” Attorney General Jeff Sessions said. “But this illegality stops right now…we have taken a major step toward keeping women and children across America safe.”

Seven additional employees including co-founders Michael Lacey and James Larkin were arrested on April 6 with a 93-count indictment.