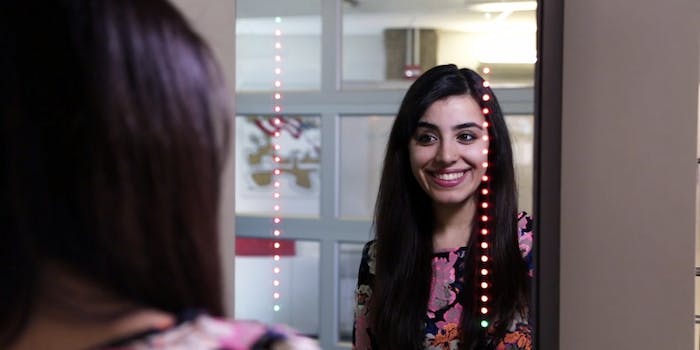 Introducing S.E.L.F.I.E., the mirror that takes selfies for you

It makes a perfect gift for the narcissistic personality disorder sufferer in your life.

Scientists are saying that modern humans are in danger of becoming so self-obsessed that the world as we know it will end not with a whimper, nor with a bang, but with the loud suctioning sound of the universe contracting into its own butthole. If you want proof of this fate, look no further than the automated selfie mirror, a device that takes full-length selfies for you and then automatically posts them to Twitter.

S.E.L.F.I.E., a.k.a. the “Self-Enhancing Live Feed Image Engine,” is coming to you directly from the messengers of the apocalypse satanic lackeys innovative scientific minds at iStrategyLabs.

To use S.E.L.F.I.E., you stand in front of the two-way mirror and strike your best pose as its embedded L.E.D.s count down to a “flash.” Then a webcam hidden in the mirror takes your picture and automatically posts it to Twitter.

Here’s a demo, so when the world is engulfed in flames and giant mutant rat/pigeon hybrids have taken over Manhattan and people are eating cardboard peanuts for protein, you can tell your children and your grandchildren you witnessed the beginning of the end firsthand:

So who would actually buy a S.E.L.F.I.E.? CNET speculates that the device could be of use not just to frequent Instagram selfie takers, but to clothing stores who want to allow shoppers to share photos of themselves trying on clothes before making buying decisions. Fair enough. We’re too distracted by the sound of the four horsemen’s hooves stampeding in the distance to pass judgment either way. Clop clop. Clop clop.