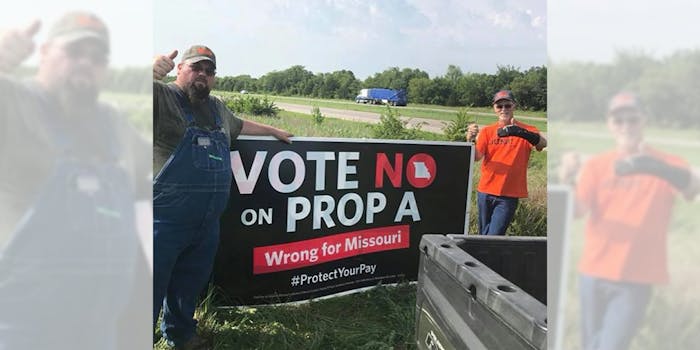 Why last night’s elections shouldn’t be disheartening to progressives

It was a setback, but not a huge one.

It’s hard to paint the elections of Aug. 7, 2018, as a good night for progressives. Left-leaning candidates were largely wiped out in their primaries, while the special election in Ohio’s 12th district ended in a narrow loss for Democrats, resulting in another of the moral victories that have been the hallmark of recent contests.

However, if you pull back from the results of the elections and look at the trends that motivated them, there is plenty to be hopeful about in the future. Moral victories could be converted into actual wins in November.

The biggest disappointment of the night for progressives was Abdul El-Sayed’s loss in the Michigan Democratic primary. Many on the left view El-Sayed’s platform as a model for how a left-wing candidate could win a national race. He ran aggressively on major progressive issues like Medicare for All and $15 minimum wage while tailoring his message specifically to Michiganders with ideas like state-run broadband and an infrastructure fund.

In recent weeks, El-Sayed has captured national attention in much the same was Alexandria Ocasio-Cortez did before her stunning upset in New York’s 14th district.

It was not meant to be. Endorsements from progressive stars like Ocasio-Cortez and Bernie Sanders weren’t enough to put El-Sayed over the top. In fact, it’s hard not to call the victory of his establishment opponent, Gretchen Whitmer, a landslide. Several other progressive Democrats suffered similar defeats by more centrists candidates in local races around Michigan.

While the feeling among progressives is that we haven’t seen the last of 33-year-old El-Sayed, the result is a disappointment.

A similar story was the case for candidates with less of a national profile. Nurse and Ferguson activist Cori Bush in Missouri’s 1st district and attorney Brent Welder in Kansas’s 3rd district had robust progressive chops, including Our Revolution support and Ocasio-Cortez endorsements, and still went down hard.

Democrats in general were also handed a bitter loss in the one House special election of the night. In Ohio’s 12th district, Republican Troy Balderson very narrowly defeated Democrat Danny O’Connor. While many prominent Democratic voices rushed to blame the Green Party candidate Joe Manchik (whose vote totals would not have swung the result) for the loss, this is a repeat of a trend for Democrats. Establishment darling Jon Ossoff in Georgia and progressive literal-cowboy Rob Quist in Montana also lost their special elections despite outperforming expectations.

Special elections are notoriously hard to win because the incumbents who are selected for cabinet positions and other executive offices are often chosen in part because their seats are safe.

Hope for the future

Crazy stat: @NRCC has won more special elections in the 2018 cycle than any cycle in their history.

If anything, tonight's #OH12 result reinforces our view that Dems are substantial favorites to retake the House in November.

While the elections went poorly for progressive Democrats, the trends are still moving in their direction. Turnout was incredibly high across the board, which bodes well for candidates towards the left end of the spectrum. Many of the progressive candidates were significant underdogs, and most of them outperformed their expectations. Additionally, there were some victories with less of a national profile that could indicate a positive forecast for November.

Democrats massively outperformed their previous results in Ohio’s 12th despite the narrow loss. A district that went to Republicans by 37 points in 2016 came down to the wire. Political wonks see this as a sign that the House could swing Democrat in November.

On a more granular level, progressive strategies are also paying off. There was a massive fight against proposed union-busting “right to work” legislation in Missouri, and the referendum meant to cripple unions was defeated 2 to 1. This is a sign of the resurgent labor movement, as pro-business forces in the state were massively out-fundraised. Dan Mehan, the leader of the Missouri Chamber of Commerce admitted, “We just got blown out.”

In St. Louis, the national trend of replacing attorneys with more progressive voices continues to pay dividends. Following in the footsteps of district attorney Larry Krasner in Philadelphia, Black Lives Matter-backed candidate Wesley Bell emerged victorious over Bob McCullogh, the city prosecutor who oversaw the Michael Brown case and failed to get an indictment against the police officer who killed him.

McCullogh is also notoriously anti-protester and pro-bail, and his loss is a sign of strength for BLM.

Rashida Tlaib won the Democratic primary in Michigan’s 13th district. It is a near certainty that she will become the first Muslim woman to serve in Congress, replacing disgraced Democratic mainstay John Conyers. The Palestinian-American was one of few left-wing bright spots of the night. She was backed by Detroit DSA, Our Revolution, and Justice Democrats, fitting the profile of victorious progressive candidates. James Thompson, a candidate with a similar progressive profile, won his primary in Kansas’ 4th district.

Tlaib is representative of an influx of diversity that has been a trend for Democrats. If nothing else, the Trump era has produced a record number of candidates who aren’t straight white men seeking Democratic office, and many of them continue to win.

Last night’s results were not a wave for the left.

Though there was scattered cause for celebration, in races with national resonance, progressives came up short. Seeing headlines like “Most of the Candidates Ocasio-Cortez Endorsed Lost in the Primaries” from right-wing outlets and “Democratic Party’s Liberal Insurgency Hits Wall in Midwest Primaries” at more establishment papers isn’t easy for activists across the country who felt like they were finally breaking through. But with November on the horizon, signs still point to a “blue wave,” and left-wingers continue to run ahead of expectations.

While both establishment Democrats and progressive insurgents are tired of “moral victories,” the list of wins on Tuesday night—moral and actual—is enough to provide an additional measure of hope for the upcoming midterm elections where more consequential battles will be fought.