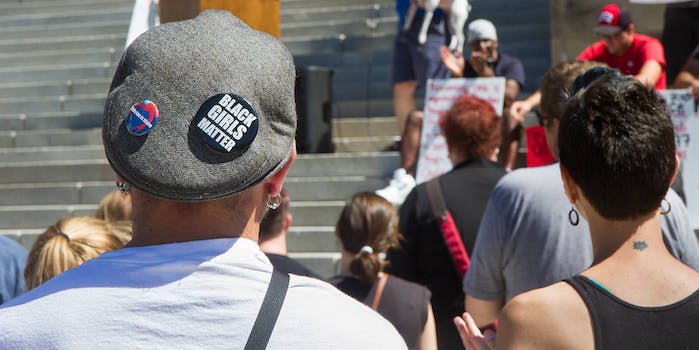 She faces five days in jail.

An Ohio attorney faces jail time for refusing to remove a “Black Lives Matter” pin on her lapel in a Youngstown courtroom Friday.

Attorney Andrea Burton was advised by Judge Robert Milich to remove the button, saying she wasn’t legally allowed to wear it in the courtroom. When Burton refused to remove it, he declared her in contempt of court and sentenced her to five days in jail.

Burton is currently appealing her sentence–the catch being that if her appeal is a success, she can no longer wear the button in the courtroom.

Burton pushed back against the decision in an interview with WFMJ, saying her button is a form of free speech and that she had every right to wear it.

“He indicated to me he didn’t know if I was trying to seek attention from the news or whatever the case was, but that legally I wasn’t allowed to wear it and I deferred and said that I’m respecting my First Amendment right. That I’m not neutral in injustice, and to remain neutral becomes an accomplice to oppression,” she said.

Milich told WKBN in an interview that a judge doesn’t support either side of the issue.

“A judge is objective and tries to make sure everyone has an opportunity to have a fair hearing, and it was a situation where it was just in violation of the law,” he said.

The NAACP Ohio branch released a public statement about the incident Friday, saying that it could violate Burton’s civil rights.

“Unless she violated the law, there does not seem to be a valid reason for her to be JAILED because she was wearing a pin with Black Lives Matter,” it read.

Some judges have a reputation for being strict on courtroom dress code. A Massachusetts judge also banned Black Lives Matter clothing in his courtroom in 2015, saying the slogan was a political message.