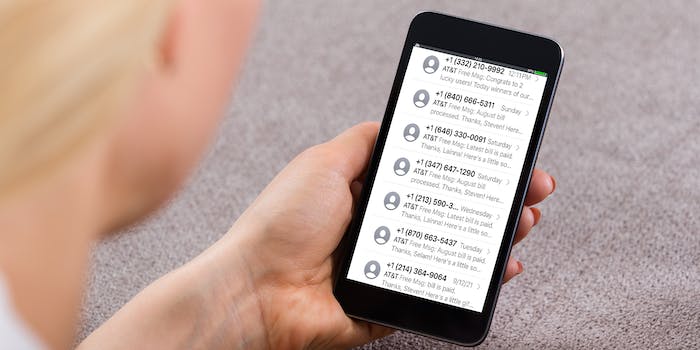 Complaints have skyrocketed in recent weeks.

People claiming to be AT&T customers are taking to social media to complain that they’re receiving a significant number of spam texts. They say most of the texts claim to be from AT&T.

Many who report receiving the spam texts claim that the volume has increased significantly in recent weeks. Some are wondering why the company hasn’t been able to control the problem.

In response to request for comment sent via email, AT&T provided the Daily Dot with links to its blogs about spam and scam texts. The blogs warn customers not to reply to such texts, click the links therein, or call the numbers they came from. They also give more information and links about detecting scams and reporting suspicious communications to AT&T.

The texts don’t appear to come from AT&T. Screenshots show the texts coming from a variety of phone numbers, none of which users recognize as AT&T’s.

“Forwarding [suspicious texts] to 7726 goes straight to AT&T’s spam defense team,” the blog states. “You’ll get a response from us. Simply reply with the number the suspicious text came from.”

AT&T writes that the “spam defense team” will then determine whether the message is a scam or otherwise illegal. If so, it may block the number and/or messages containing similar content, inform other carriers, and/or “take down the websites, email addresses and other resources used by the bad guys.”

In recent weeks, people purporting to be AT&T customers have tweeted in droves to complain about such texts. Many included screenshots of the purported texts. Most either thank them for paying their bill or apologize for a recent service issue and offer people “a little something,” “a symbolic gift,” or the like and ask them to click a link to receive it.

Many of the tweeted complaints claim that such texts have increased significantly of late. Some are amused. More are frustrated.

Some Twitter users have tagged AT&T on such complaints. On multiple occasions, the company has responded with links to information on filtering and reporting unwanted calls and texts.

AT&T has not commented publicly about the alleged increase in spam texts to customers.