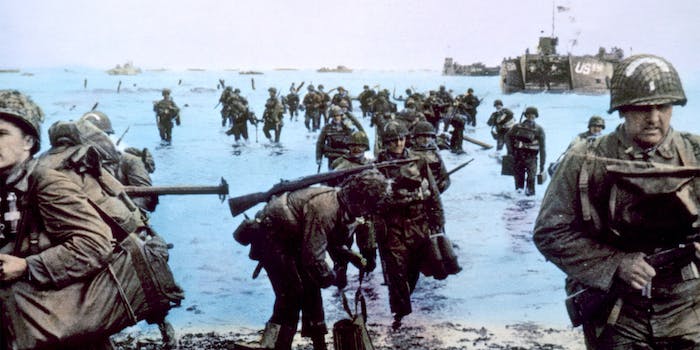 That's not right at all.

For many journalists, covering the Trump administration was a stark difference from working during the Obama years. It was a much more frenetic pace where regardless of your politics, the stakes did feel much higher and more immediate.

What it was not was a suicide mission you were drafted into at the behest of the government, which asked you to throw your body into literal waves of machine gunfire and face almost certain death.

That, is war. Journalism, which should be adversarial, is not war. It may have felt like war, occasionally, but that is not reality.

But today, the Atlantic described it just that way, in an op-ed from Yahoo’s Alexander Nazaryan.

In it, he called the “thrill” of covering the Trump administration the same “thrill” (remember that word) that young boys had on D-Day.

“I use that word, thrill, with full intention,” Nazaryan wrote. “Covering the administration was thrilling for many journalists, in the way that I imagine storming Omaha Beach must have been for a 20-year-old fresh from the plains of Kansas. He hadn’t signed up for battle, but there he was, liberating France.”

You have to be bafflingly obtuse to have called that a thriller, and akin to reporting on Trump.

For starters, journalists choose their profession. The children who stormed Normandy were mostly drafted from the government and told what to do. And staring down a slate of opposing soldiers determined to end your life is not the same thing as getting nervous when you asked Kayleigh McEnany to comment on a story you are about to publish. The slings and arrows of a thousand @s are not the same as a lone bullet, of which the troops who stormed Normandy faced by the millions. Getting a misleading quote from Steve Bannon, as the piece references, is not the same as being held as a prisoner of war.

But worse yet, the piece, originally titled “I Miss the Thrill of Trump” and since updated, ran just three weeks after Trump left office.

Maybe calm down just a touch?

And while everyone knows the media did tremendous work during the era and faced many difficulties, few if any reporters were impressed today by the Atlantic’s analogy.

“This was our Omaha Beach,” Nazaryan notes.

Thankfully, most journalists don’t actually think that way. It was just doing the job you signed up for.