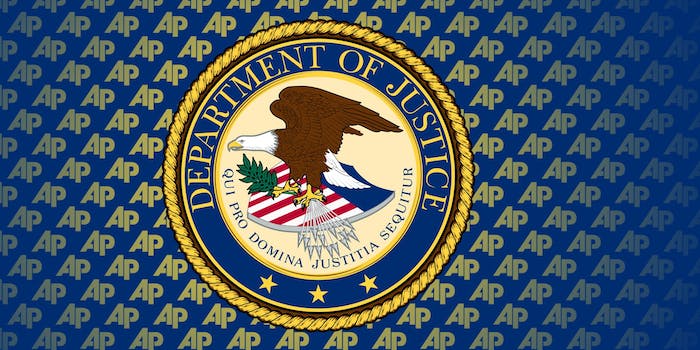 FBI agent pretended to be an AP reporter.

What happens when the FBI pretends to be the Associated Press? We’re about to find out.

In 2007, the Federal Bureau of Investigation created a fake Seattle Times website in order to deliver malware to a suspect in a school bombing. Someone was responsible for emailing a series of bomb threats against the Elliot Bay area’s Timberline High School. Now, the Associated Press is suing the United States Department of Justice to compel it to deliver documents about that campaign.

Last October, the Electronic Frontier Foundation uncovered documents that showed the FBI, in order to capture the perpetrator before he or she succeeded in carrying out a bombing, cobbled together a fake version of the Seattle Times’ website and contacted a suspect pretending to be an AP reporter.

Agents then sent a link to a fake story on the bomb threats, titled “Bomb threat at high school downplayed by local police department,” to the Myspace account of a suspect with a request that he review it. When the suspect, a 15-year-old boy who was subsequently identified and arrested, clicked on the link, it forwarded the FBI his computer’s IP address and location. It did so thanks to a piece of FBI spyware called a “Computer and Internet Protocol Address Verifier” or CIPAV.

When this stunt was made public, Seattle Times editor Kathy Best responded immediately and vehemently. She said:

We are outraged that the FBI, with the apparent assistance of the U.S. Attorney’s Office, misappropriated the name of The Seattle Times to secretly install spyware on the computer of a crime suspect. Not only does that cross a line, it erases it. … Our reputation and our ability to do our job as a government watchdog are based on trust. Nothing is more fundamental to that trust than our independence — from law enforcement, from government, from corporations and from all other special interests. The FBI’s actions, taken without our knowledge, traded on our reputation and put it at peril.

The FBI sought and received a search warrant prior to using CIPAV.

Representatives of the AP and of the Reporters Committee for the Freedom of the Press both filed Freedom of Information Act requests in the aftermath of the revelation, but in the eight years since, they have received no information on the campaign. This suit hopes to force the government to release related documents.

Last November, FBI Director James Comey wrote in a letter to the New York Times, “That technique was proper and appropriate under Justice Department and FBI guidelines at the time. Today, the use of such an unusual technique would probably require higher level approvals than in 2007, but it would still be lawful and, in a rare case, appropriate.”

Comey denies the charges of damaging reporters’ reputations, saying only the target and the agents involved saw the story, which was, in any case, a fake.

The Department of Justice did not immediately return our request for comment.