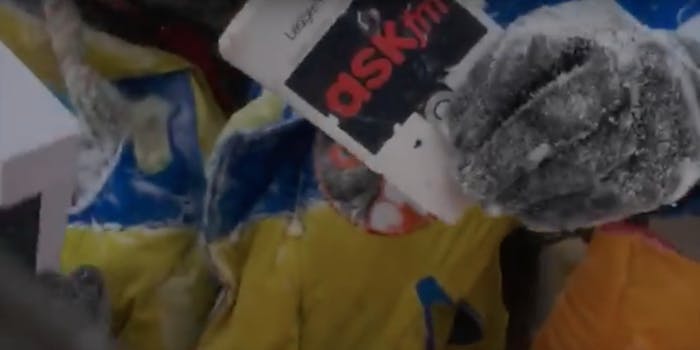 A Sherpa guide was left behind in the excursion.

Instead of a normal route of buying ads on Facebook, ASKfm debuted its cryptocurrency by sending four “crypto enthusiasts” on a Mount Everest expedition. In its aftermath, the company immediately celebrated the success of the stunt but was less forthcoming about a devastating consequence: One man was left dead in the excursion.

ASKfm, a social media network centered around Q&As, opted to present the initial coin offering (ICO) for its cryptocurrency ASKT with the Mount Everest trip. The idea was to play off a play off the “to the moon” cryptocurrency meme and suggest that its coin price would shoot sky high.

The four adventurers were tasked with burying $50,000 worth of ASKT in a nano ledger (aka, a digital wallet) at the mountain’s peak.

ASKfm explained the reason for the trip in a press release on its Medium page:

While the team succeeded in its unusual goal on May 14 (albeit with two team members needing to be airlifted out), not all members of the party made it back safely. Lam Babu Sherpa, a Sherpa man who helped ASKfm’s four-person team make it to the top of Mount Everest, was reportedly left behind on the descent. He is now presumed dead.

ASKfm didn’t comment on the death in its May 17 press release about the venture. It was only after detailed reports from the Financial Times and climbing site Rock and Ice that the company released a statement on the incident.

“Since these events transpired, it has since been confirmed by Nepalese authorities and Seven Summit Treks that Sherpa Lam Babu is missing and presumed dead after search and rescue efforts yielded no results,” ASKfm said.

Lam Babu Sherpa had completed three Mount Everest summits prior to this trip.

As ASKfm is enthusiastically promoting, one ledger is still buried on the mountain and will be given to anyone up to the task of digging it up. Another will be raffled off to whitelisted members of the ICO.