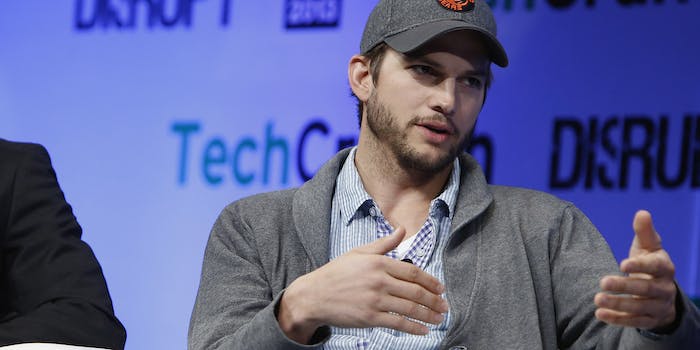 Ashton Kutcher took to his viral content website A+ on Wednesday to expand upon his comments defending “digging up dirt” on journalists, which he made after an Uber executive came under fire for suggesting the company should go after the “families” of critics in the media.

Kutcher—though he did not explicitly mention it at the time—is an investor in Uber. He also failed to acknowledge that A+ previously engaged in rampant plagiarism.

The actor and venture capitalist then went on to argue that, thanks to modern media, “we are all public figures now,” “everyone is guilty and then tasked to defend themselves publicly,” and that “so long as journalist [sic] are interested and willing to print half truths as facts … Yes we should question the source.”

On A+ several hours later, Kutcher expanded upon these thoughts, saying that he was “not suggesting that threatening journalists is OK. I am only questioning where the line between public and private is—and where we want it to be.”

Calling for less invasive scrutiny, Kutcher argues that “we have to stop though-policing each other. If we aren’t allowed to have bad ideas we will never have the room to have a good one.” Kutcher fails to acknowledge the caveat that allowing people some leeway does not mean bad ideas are exempted from criticism—especially when they entail attacking journalists’ families with million-dollar budgets and smearing them as “shady.”

Ultimately, Kutcher has more questions than answers. “Where is the line for ‘the public’s right to know?’” he asks, mulling over whether “politicians [and] celebs” should be “fair game” while “well-known journalists” are not.

“I do not think journalists should be bullied but I do think that with the vast shift of media dynamics that has taken place since the birth of social media we need to consider and revisit the boundaries of what we believe to be ethical in news gathering,” Kutcher concludes. “In a world where everyone has a camera, everyone has a recorder, everyone has a publishing platform, who is a journalist and who is not? What’s on the record and what’s off? Maybe we should think about what freedom of the press really is, and what constitutes an invasion of privacy, hearsay, or outright slander?”

A+ is an interesting choice of platform for Ashton Kutcher to ruminate over “ethics in news gathering,” considering a Daily Dot investigation revealed that the website was plagiarizing numerous articles from BuzzFeed, the Huffington Post, Cracked, and more, in August. When confronted, the site deleted the offending content, but neither Kutcher nor co-founders Evan Beard and Kendall Debaghi ever issued an apology.

@aplusk @pando @Uber Because journalists have a lot less power than a billion $ co, and are tasked with stewarding the truth vs. profit.

@aplusk @pando It's not @Uber's function to perform takedowns, it's to provide reliable transportation. This isn't politics, it's product.