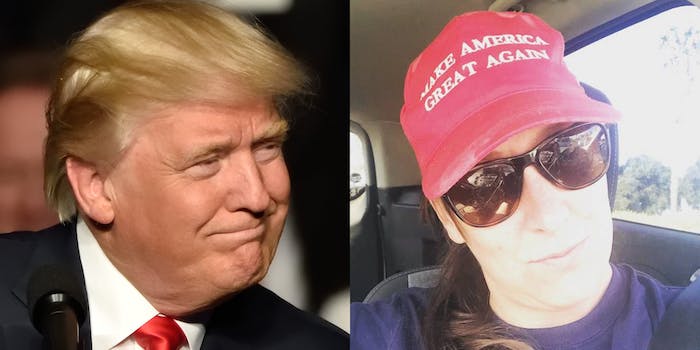 'We must all demand justice,' Trump said.

Yesterday, former President Donald Trump shared a video message with the family of Ashli Babbitt on what would have been her birthday.

Babbitt was shot and killed during the Capitol riot on Jan. 6, as she and fellow Trump supporters stormed the Capitol in protest of the 2020 election results. In the wake of her death at the hands of Capitol Police, Babbitt has become a martyr for the far-right, as they believe she was unjustly killed.

Trump, who is floating a 2024 presidential run, has latched onto Babbitt as a cause célèbre along with the party faithful. He has long been demanding an investigation be opened into her death. Prior to the officer who shot Babbitt coming forward, Trump pushed for and teased the release of his name.

Now, Trump has come to fully embrace the reclamation of Babbitt, who was an out-and-out QAnon supporter, sending a videotaped message to her family on what would have been her 36th birthday this weekend.

“There was no reason Ashli should have lost her life that day. We must all demand justice for Ashli and her family,” Trump said in the video.

Independent journalist Ford Fischer was first to share the message.

While Babbitt’s actions—and that of the pro-Trump crowd on the Capitol that day—seem difficult to defend, the far-right has made it a mission to cast her as an innocent victim in a peaceful protest.

An investigation by Capitol Police found the shooting justified, but in his message, Trump called on the Department of Justice to reopen a case into Babbitt’s death.