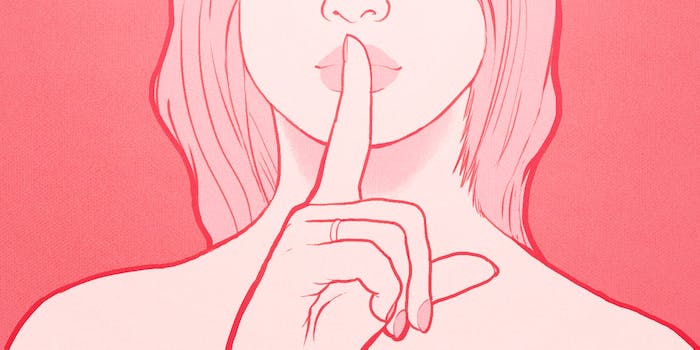 The Internet is deeply divided over the unprecedented hack.

Most massive hacks don’t make millions of people chuckle and reach for a divorce lawyer joke. But then again, this hack is unprecedented.

More than 30 million users had their personal data exposed late Tuesday when nearly 10GB of data stolen from the world’s biggest adultery dating site, Ashley Madison, hit the Dark Net for anyone to see.

Ashley Madison fell victim to a devastatingly thorough attack last month. After the website’s owners refused to shut it down despite the attackers’ demands, the hackers followed through on their threats and posted names, addresses, passwords, and credit card information of users around the world.

Normally when an enormous data breach like this happens, the consensus is that it’s a bad thing. Now that it’s happened to cheaters, however, the public’s schadenfreude over adulterers’ trouble is largely overshadowing concerns about privacy, criminal theft, or even the fact that adultery and sexual orientation can lead to jail or death in some countries where Ashley Madison has users.

There are a handful of major sources of disagreement and condemnation of the leak but, overall, the hackers can claim a resounding public relations victory over Ashley Madison.

“People are posting direct links to the dump, screenshots of lists of emails, and statistics for classes of domains,” security researcher Thomas H. Ptacek explained. “The general reaction to the availability of the dump is reasonably characterized as ‘glee’.”

Perfect timing too, w/ election season looming around the bend..
Let's see whose been naughty and whose been nice LOL…#ashleymadisonhack 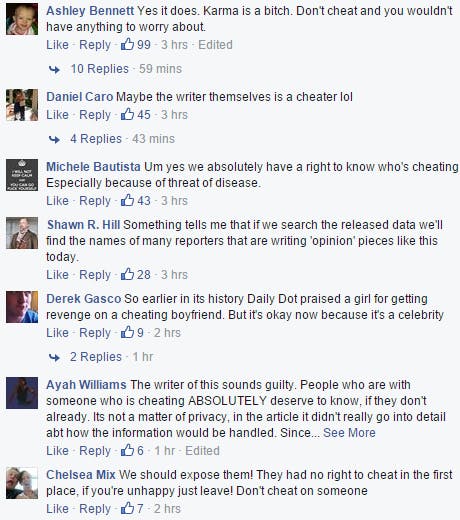 Exposing cheaters is the celebrated cause today across a wide range of the Web. On Facebook and Twitter, nearly all the major media stories on the hack have been overwhelmingly met with the sentiment that cheaters deserve what’s coming to them.

If you went online to cheat on your significant other, you deserve to have all your information posted. #ashleymadisonhack

On 4chan, users have been combing through the leaked data in search of treasure—a high-profile name who they can verify, expose, and embarrass. On 8chan, a self-described right-wing base is fixated on the fact that Ashley Madison is run by a Jewish man as users search for their own high-profile targets.

Even beyond well-known targets like politicians or large businesses, 8chan is combing through the profiles of normal, non-public individuals and connecting them to Facebook accounts in a series of events that could lead to the destruction of a lot of marriages.

On the other hand, there are several notable communities on the Internet resisting the popular bloodlust against adulterers—most notably privacy advocates and mainstream media outlets.

For many privacy advocates, the exposing of adulterers’ personal information—including sexual orientation and specific kinks—recalls popular pushes for massive state surveillance pushed in the wake of 9/11 and the start of the War on Terror. These are emotional issues that privacy advocates say can put the public into a similar state of mind as adultery.

“I think this is a strong parallel to the privacy violations with regards to the NSA,” security developer Dylan Saccomanni argued. “You can’t convince people that it’s wrong if they have elevated their own ethical crusade beyond their right to something such as privacy.”

The other major holdout is media.

In the past, headline-grabbing data leaks have led to months of stories gleaned from reporters combing through the leaks and picking out the most interesting parts. When Sony was hacked in 2014, the company’s internal emails were deemed fair game by most media. If something caught a reporter’s eye, it was often published mere moments later.

This time around, it appears that most news outlets are making a different choice, at least in the first day after the Ashley Madison leak.

Alongside countless warnings that the data in the leak is difficult to verify, reporters are thus far mostly abstaining from posting high-profile names found in the leaks even as social media buzzes about the fact that emails exist in the database from eye-catching domains like WhiteHouse.gov (for example: [email protected]) and Harvard.edu.

To add to the skepticism, WhiteHouse.gov is not the domain the White House uses for email. (It uses who.eop.gov.) So, if President Obama were trying to have an affair, it may be the understatement of the century to say this is probably not how he would do it.

There are a few exceptions to rule. The Jerusalem Post published an article on Wednesday about an Arab-Israeli politician’s email being found in the leaked data.

“Someone signed up with my email address in order to sully my good name,” Taleb Abu Abrar responded, denying the claims and demanding Ashley Madison reveal whoever registered with his name.

There are other high-profile politicians and businesspeople from around the world whose name and information appear in the data set that have yet to receive any press attention. Although no outlet has come out expressly forbidding its journalists from reporting on any particular name, it’s telling that so few publications are writing anything about specific people who may have been using Ashley Madison.

The biggest name mentioned so far in association with Ashley Madison is former U.K. Prime Minister Tony Blair, whose email address and name appears in the hacked data.

However, few reporters expect that data to be real and most are using it as a prime example of how untrustworthy much of this leak likely is.