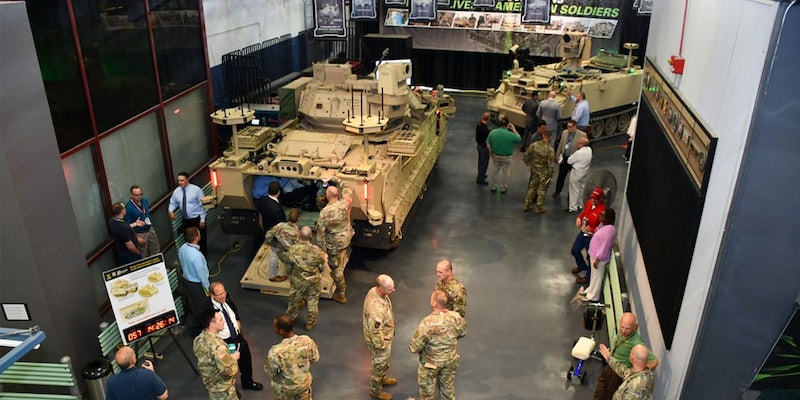 Uh-oh, we’re one step closer to having a robot army

The Army plans to conduct live-fire testing in 2020 for a robotic combat vehicle.

Built on the chassis of an M113 armored personnel carrier, the RCVs will be remotely controlled by nearby soldiers inside modified Bradley Fighting Vehicles known as Mission Enabler Technologies-Demonstrators (MET-Ds).

The MET-Ds come equipped with a wide range of technologies including touchscreen-controlled cameras and a gun turret. The vehicles will allow soldiers to fight from a distance.

The first round of testing will begin in March 2020 at Fort Carson in Colorado and will include two MET-Ds and four RCVs. The Army wrote in a press release that it will then use feedback from the soldiers involved “to improve the vehicles for future test phases.”

“The vehicles are experimental prototypes and are not meant to be fielded, but could influence other programs of record by demonstrating technology derived from ongoing development efforts,” according to the Army.

Autonomous vehicles, the Army hopes, will one day help penetrate enemy lines while keeping soldiers out of harm’s way.

“You’re exposing forces to enemy fire, whether that be artillery, direct fire,” David Centeno Jr., chief of the center’s Emerging Capabilities Office, said in the press release. “So, we have to find ways to penetrate that bubble, attrit their systems and allow for freedom of air and ground maneuver. These platforms buy us some of that, by giving us standoff.”

Following next year’s test, the Army plans to conduct similar exercises with a larger number of MET-Ds and RCVs in 2021 and 2023.

Much like its drones in the sky, the military is attempting moving toward autonomous robots for both their offensive and defensive actions.

While fully autonomous robots are likely far off, Maj. Cory Wallace says the goal is to reduce the risk for soldiers in combat.

“An RCV reduces risk,” Wallace said in the press release. “It does so by expanding the geometry of the battlefield so that before the threat makes contact with the first human element, it has to make contact with the robots.”