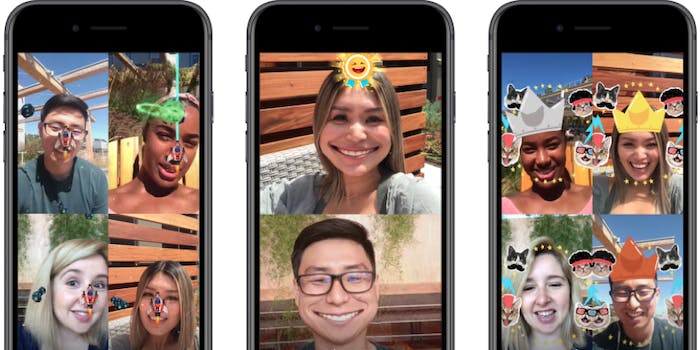 There are more games to come.

Facebook is making good on its promise to make augmented reality a bigger part of its apps’ experiences. On Wednesday, Facebook Messenger gained two new AR games so you can play with friends face-to-face, in real-time, even if you’re not in the same place.

Facebook Messenger’s multiplayer video chat AR games are called “Don’t Smile” and “Asteroids Attack.” As you might expect, in “Don’t Smile,” the goal is to see who can keep a serious face for the longest. First to crack a smile in this staring contest loses; last to hold out wins.

In “Asteroids Attack,” you’ve got to use your face to steer an onscreen spaceship to avoid virtual obstacles. The spaceship is situated on your nose. (While it may look silly, everyone playing is in the same spaceship-nose predicament. And yes, you and your friends can screen grab games, documenting winning scores or ridiculous looks.) You can play these games with up to six people.

Facebook has other games in the works, as well. “Beach Bump” will entail passing a beach ball back-and-forth onscreen. “Kitten Kraze” is a matching game with cats.

The first two games are available now in the latest version of Messenger. To play, either open an existing conversation with friends or create a new conversation with the person or group you want to chat with and select the video icon situated in the upper right corner. Next, tap the star button. There you’ll see a list of AR games to choose from. If you select one, the group you’re chatting with will get a notification that it’s time to start playing.

Facebook developed these games using AR Studio, its developer tool for building interactive experiences with Facebook’s in-app camera. The latest version of AR Studio, introduced in May, includes visual, drag-and-drop capabilities, so it’s easy to use even if you don’t have extensive coding experience.