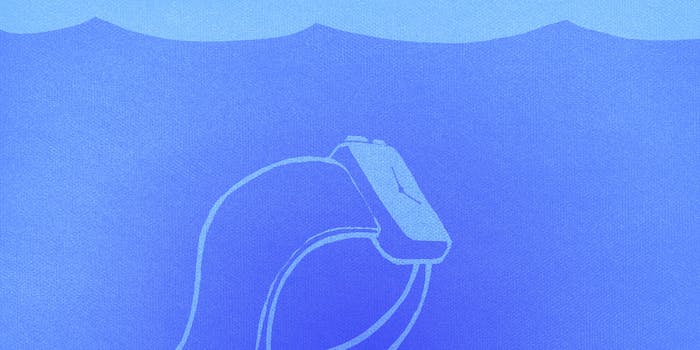 Apple's first smartwatch is a lot more durable than the company claims.

The Apple Watch isn’t very happy in water—or so Apple says. The company only claims that the watch has an IPX7 water resistance rating, which means that being submerged in 40 meters of water or taken on a vigorous swimming session could kill your pricey wearable. But as one torture tester has demonstrated, that’s simply not the case.

An IPX7 rating for the Apple Watch means that it’s designed to withstand the pressure of a single meter of water for a time period of 30 minutes. That clears Apple Watch wearers for things like washing their hands, exercising in the rain, or perhaps taking a quick shower.

YouTube user DC Rainmaker has been putting the device through much more grueling tests to see just how much water it can take. The answer, surprisingly, is that it can withstand much more than Apple claims.

Among his various tests, Rainmaker subjected the gadget to multiple high dives into a pool, a 1,000-meter swim, and, most impressively, a water test chamber where it was hit with 40 meters’ worth of pressure.

All of these stunts should have sent the watch to meet its maker, but it managed to survive the gauntlet completely unphased.

Apple clearly wanted to be as cautious as possible when rating the gadget. In an attempt to avoid any “My Apple Watch was killed by a pool” stories, the company probably decided to hold back on more impressive water resistance ratings so that stories about the device’s pool prowess are pleasant surprises rather than horror stories.