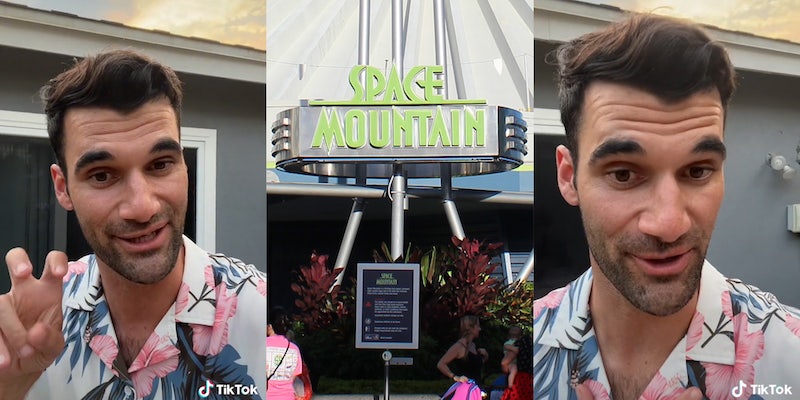 "What I thought was this cool 'meet-cute chance encounter' was actually like an episode of 'You.'"

A man on TikTok alleged that he discovered his ex-girlfriend of four years planned their initial encounter by hacking his Apple Watch to determine his location.

In a video with over 2.4 million views, user Robby (@thesephew) says his ex, who worked as an engineer at Apple, “hacked” his Apple Watch in order to track his location so she could “accidentally” get behind him at Space Mountain. In the caption of a later video, he says he only discovered this after four years of dating.

Robby makes additional claims about the woman in other videos, ranging from her following him to the grocery store to buy his favorite snacks to referencing activities he liked that she learned about through “stalking” his Instagram.

In a video explaining how he believes the hack occurred, Robby says that the woman was apparently following his online presence for a while after seeing his modeling photos. When he posted that he was going to a specific Apple store to buy an Apple Watch, the woman allegedly showed up to the same Apple Store. From there, Robby says she “had some sort of device that was able to get into the Bluetooth and hack the location software on my Apple Watch.”

However, there are some details that cast doubt on Robby’s story.

First, Robby’s TikTok page is full of fabulous stories filled with unverifiable information. For example, he claims in one video that his wife was sent to prison after killing an endangered seagull. Robby says his uncle, who he says is a U.S. Senator, “called in a favor” to allow the woman to be imprisoned at the prison where Robby claims to be a guard. Here, he says, he impregnated her with twins.

He added in the comments of a later video that his wife was given a 12-month sentence, claiming in a further video that she was let out of prison early so that the government would not have to pay for the birth of their twins. In an additional video, he claims she was identified after the police found her toenail in a bird’s beak.

However, his wife keeps an active TikTok page and has posted videos through the period in which Robby claims she would have been in prison. She appears to have also never mentioned an incident involving killing an endangered seagull, and while people have been tried for killing seagulls before, the Daily Dot could not find an incident in which a person was sentenced to 12 months for doing so—or any other story that could tie Robby’s claim to reality.

Returning to the Apple Watch story, while the idea of Bluetooth-based hack seems improbable, it is possible that the alleged woman could have found another way to access the location data of his Apple Watch using something like Apple’s “Find my iPhone” service.

That said, and the likely-false seagull story aside, there are other details from the Apple Watch story that cast doubt upon its veracity.

To start, Robby claims in one video that he was made aware of the hack after one of the woman’s co-workers claimed that the alleged stalker told her she “landed a new guy with her tech skills,” leading him to discover the tracking. After he confronted her and she admitted to it, he says he ended the relationship and blocked her across all platforms immediately.

However, according to Robby’s other videos, the couple had been together for four years at this point, meaning it is unlikely that his ex would refer to him as a “new guy.”

Furthermore, Robby changes the story of the reveal in his most recent video, saying instead that the co-worker told him “your girlfriend of four years is not who you think she is.” This co-worker, he says, was only motivated to tell him after her and the alleged ex had a “spat.”

“She had known since day one,” he said of the co-worker in the caption.

Despite these discrepancies, some users remained convinced that the story is true—and are eagerly awaiting further details.

We’ve reached out to Robby via Facebook message and Apple via email.